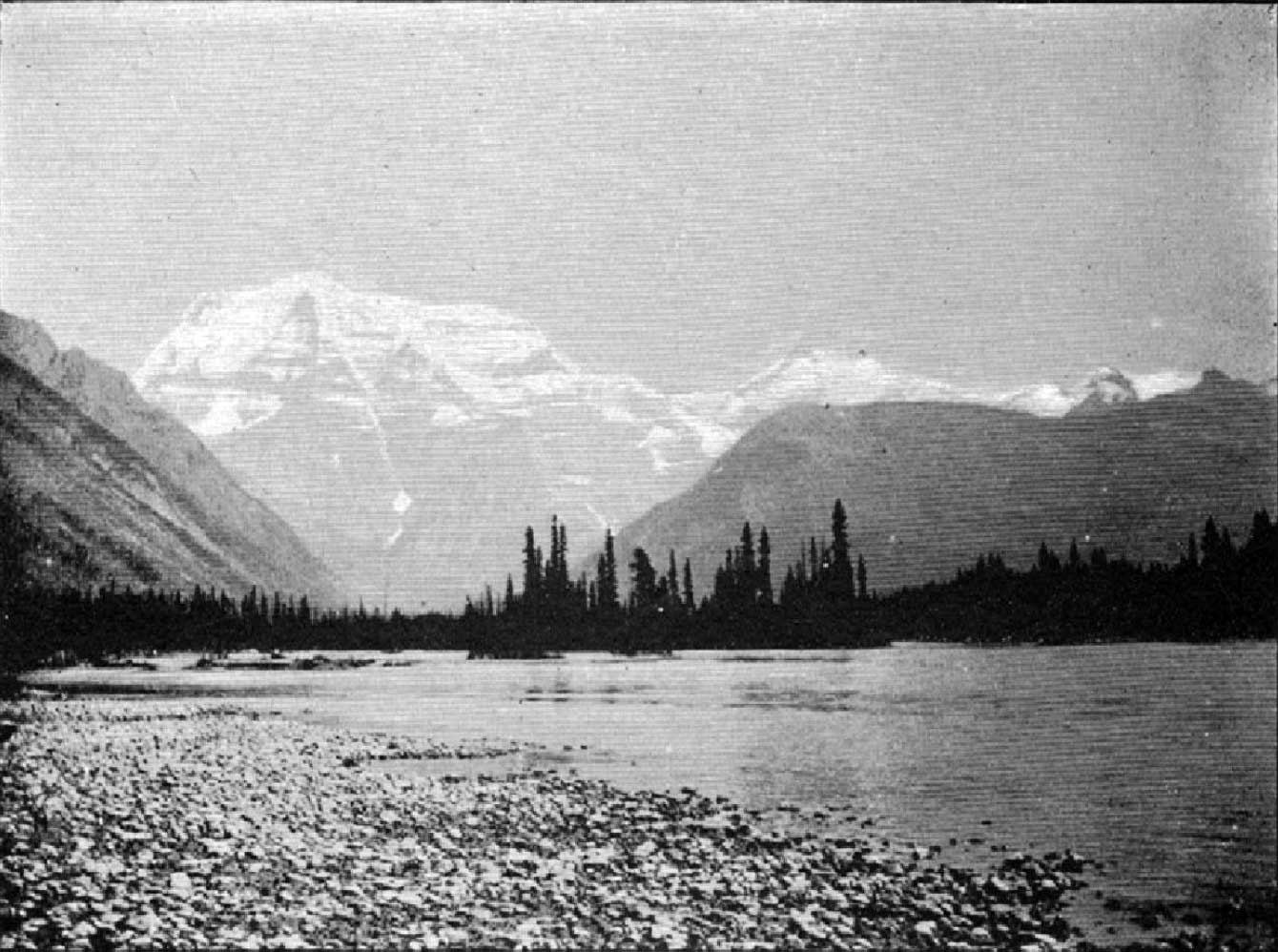 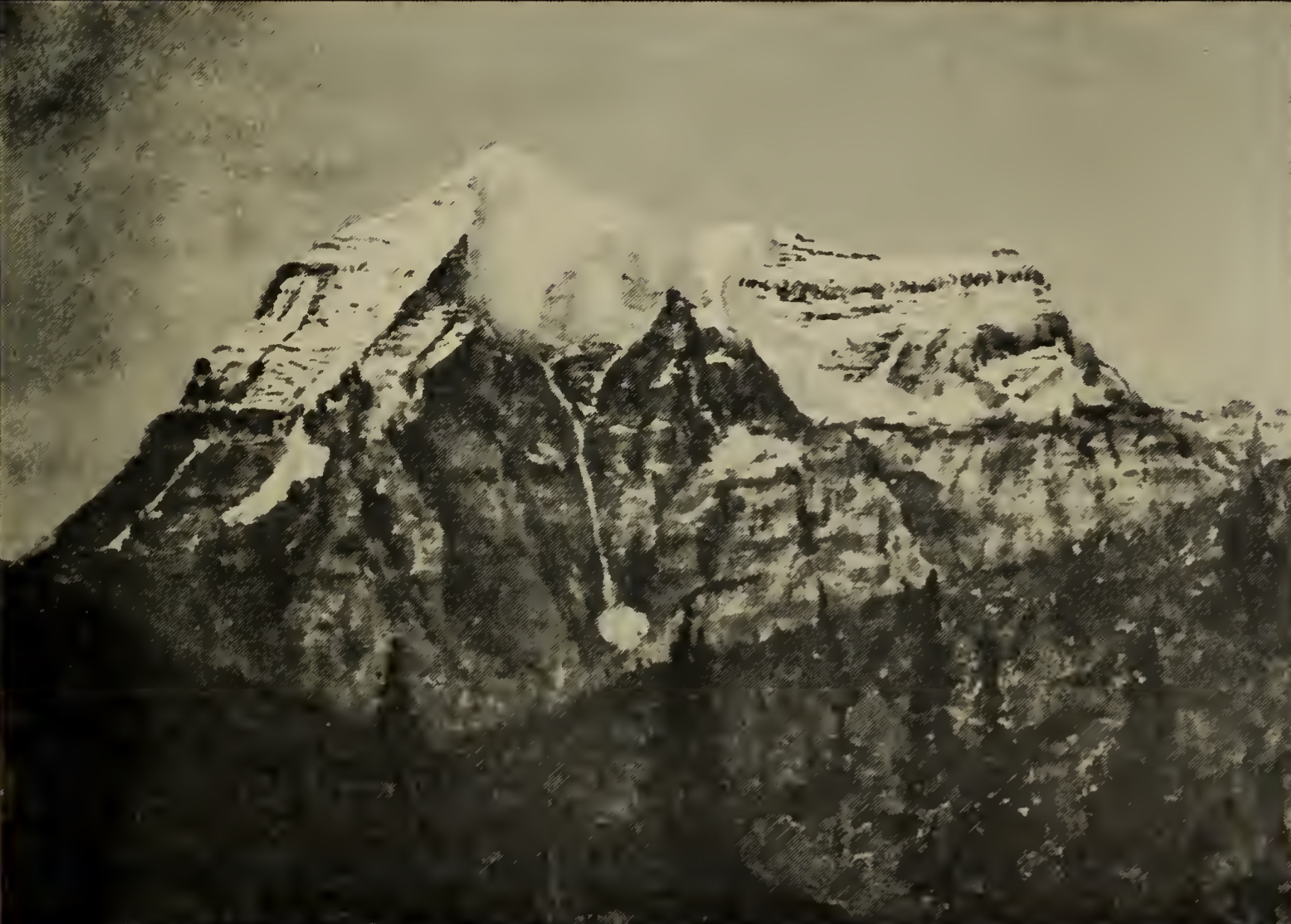 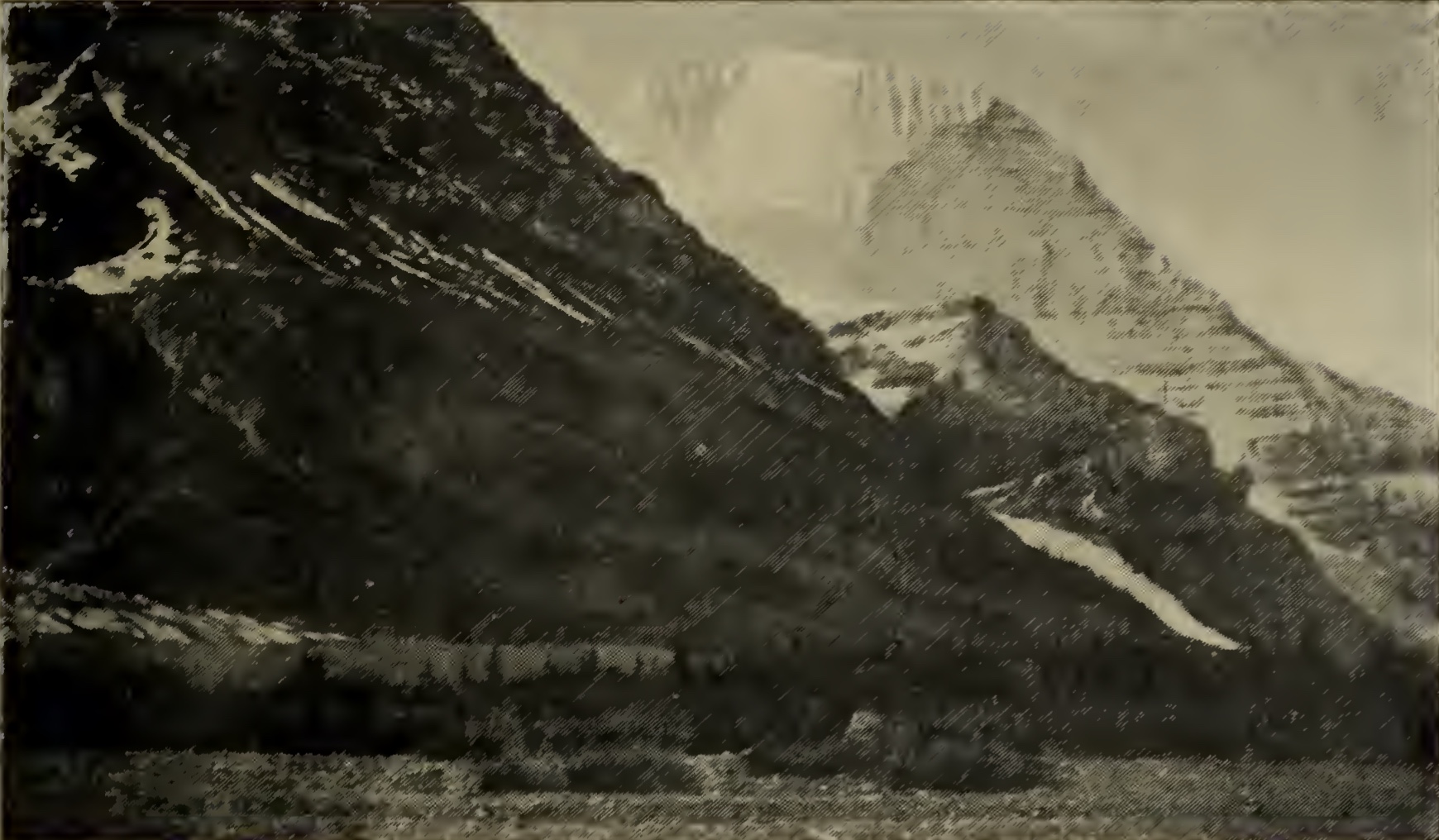 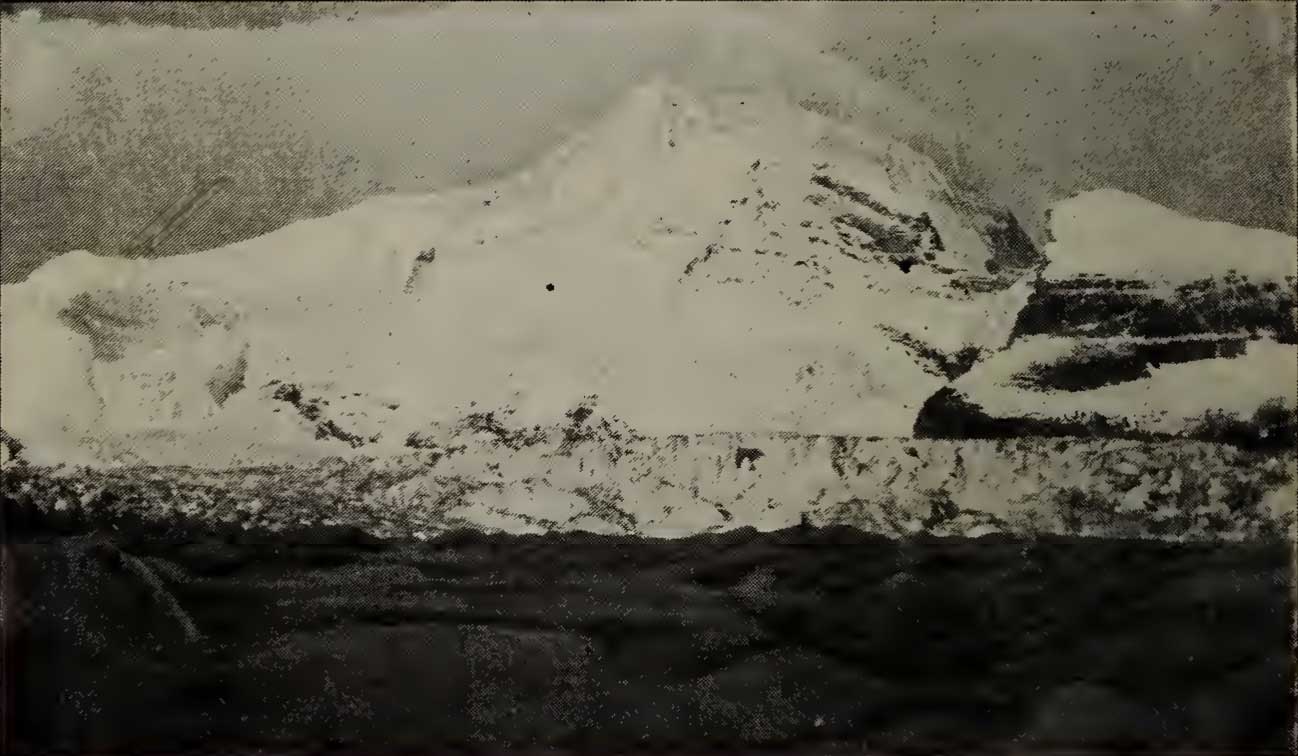 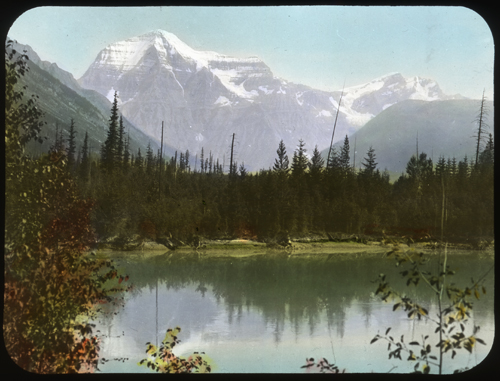 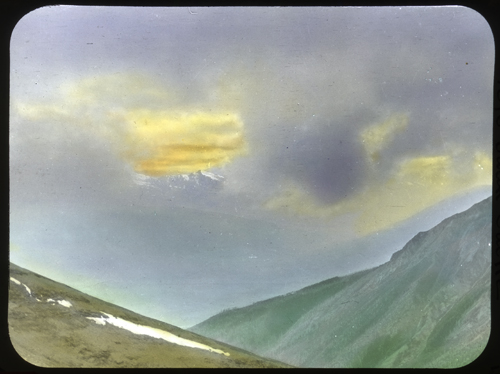 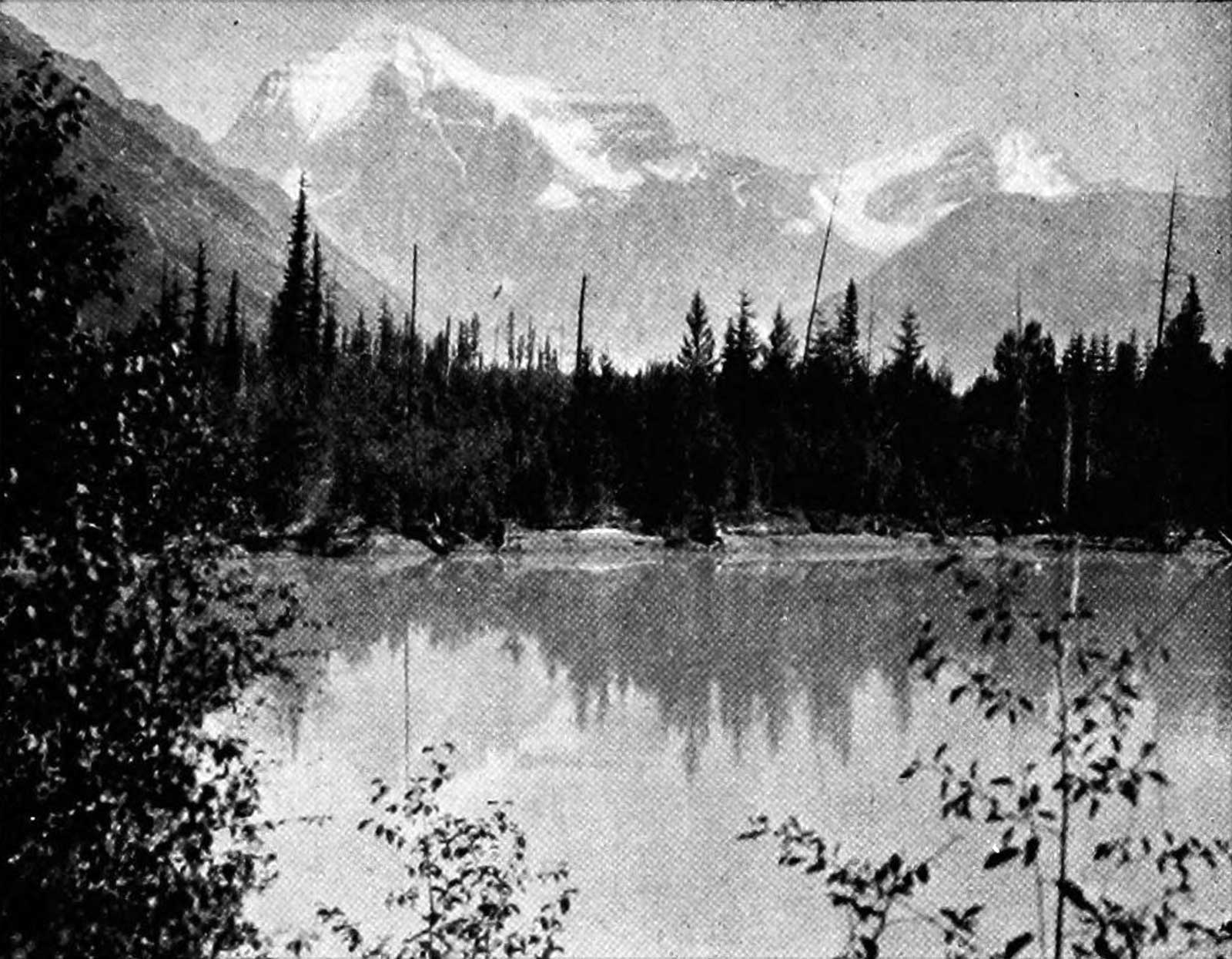 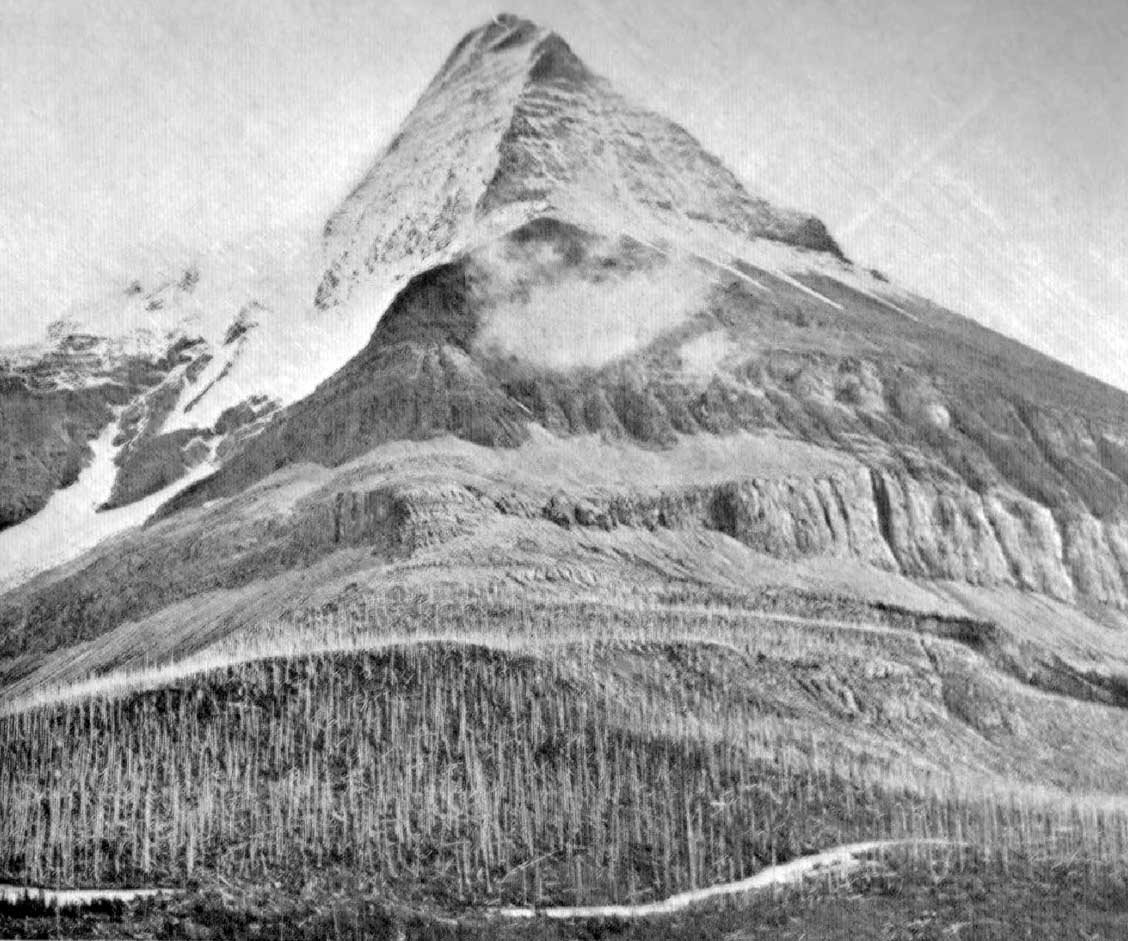 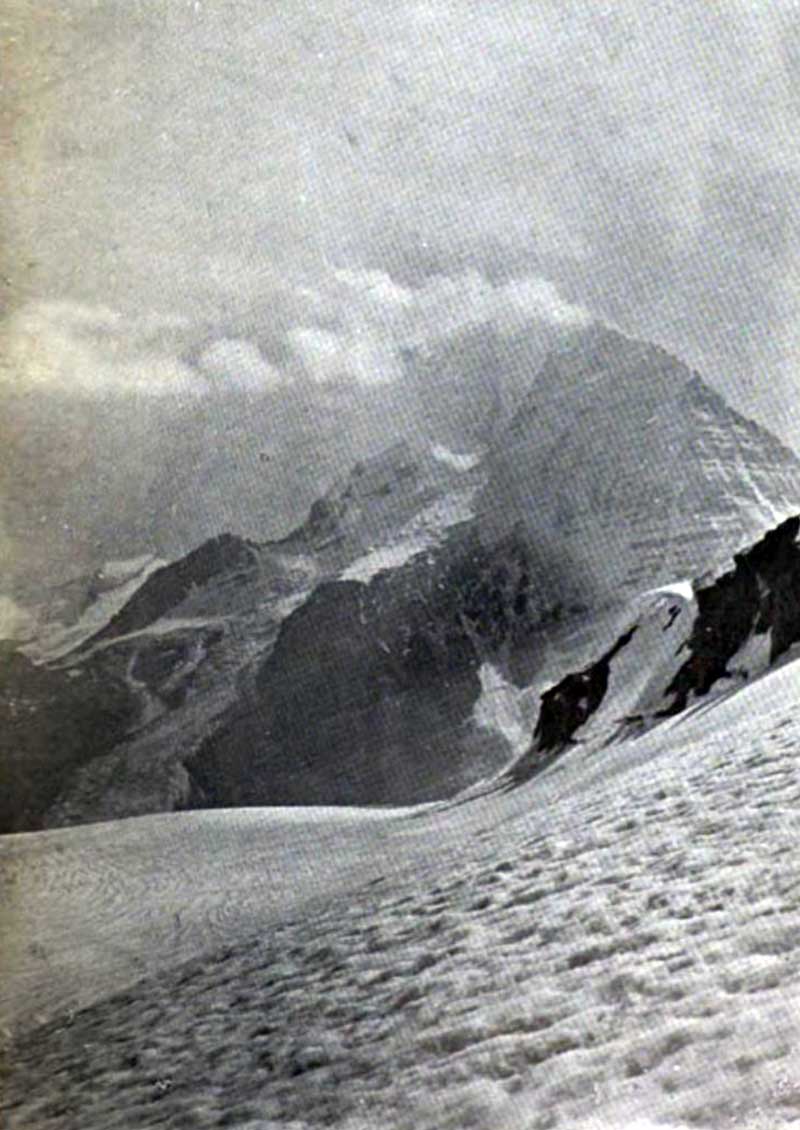 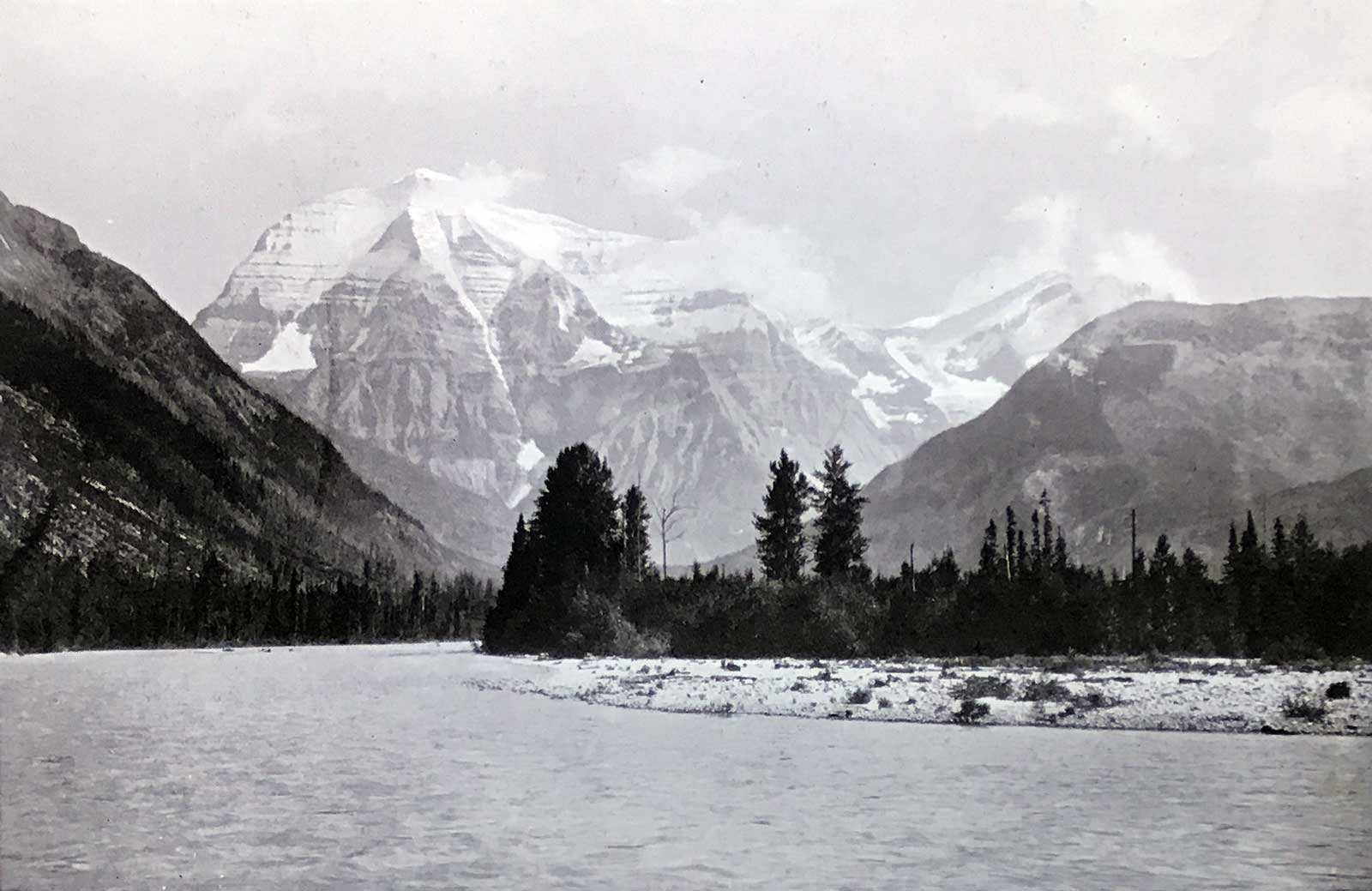 The most majestic of Canadian Mountains.
Mount Robson, 13,700 feet high, the loftiest peak in the Canadian Rockies, viewed from the Grand Fork. 1910.
F.A. Talbot, New Garden of Canada, 1911 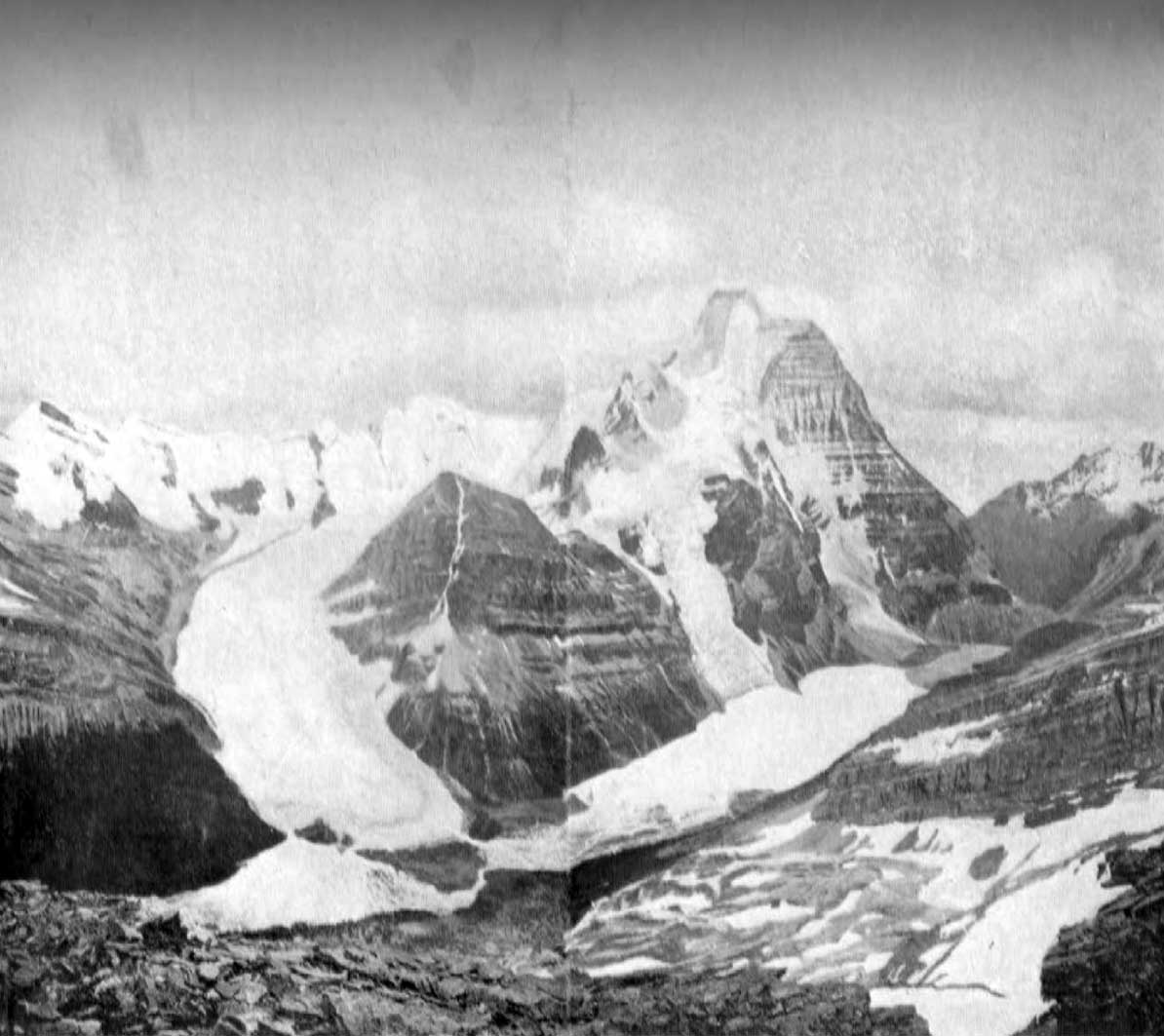 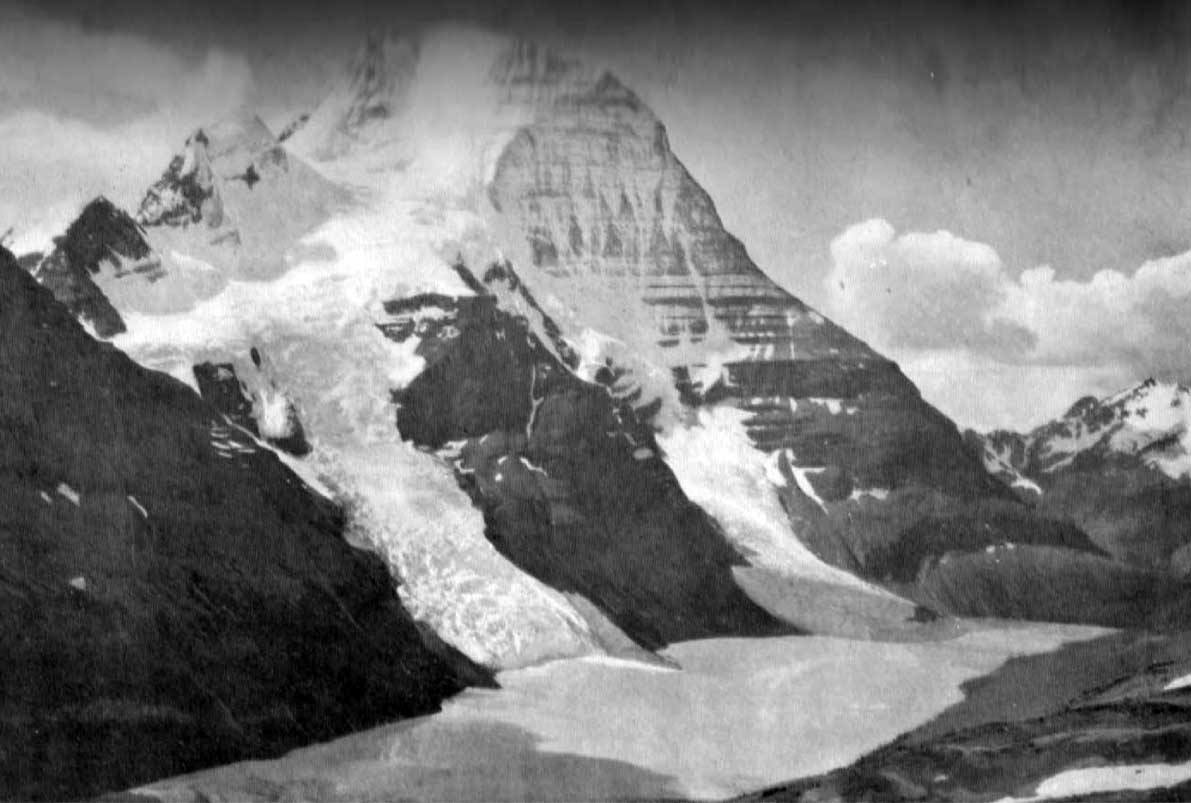 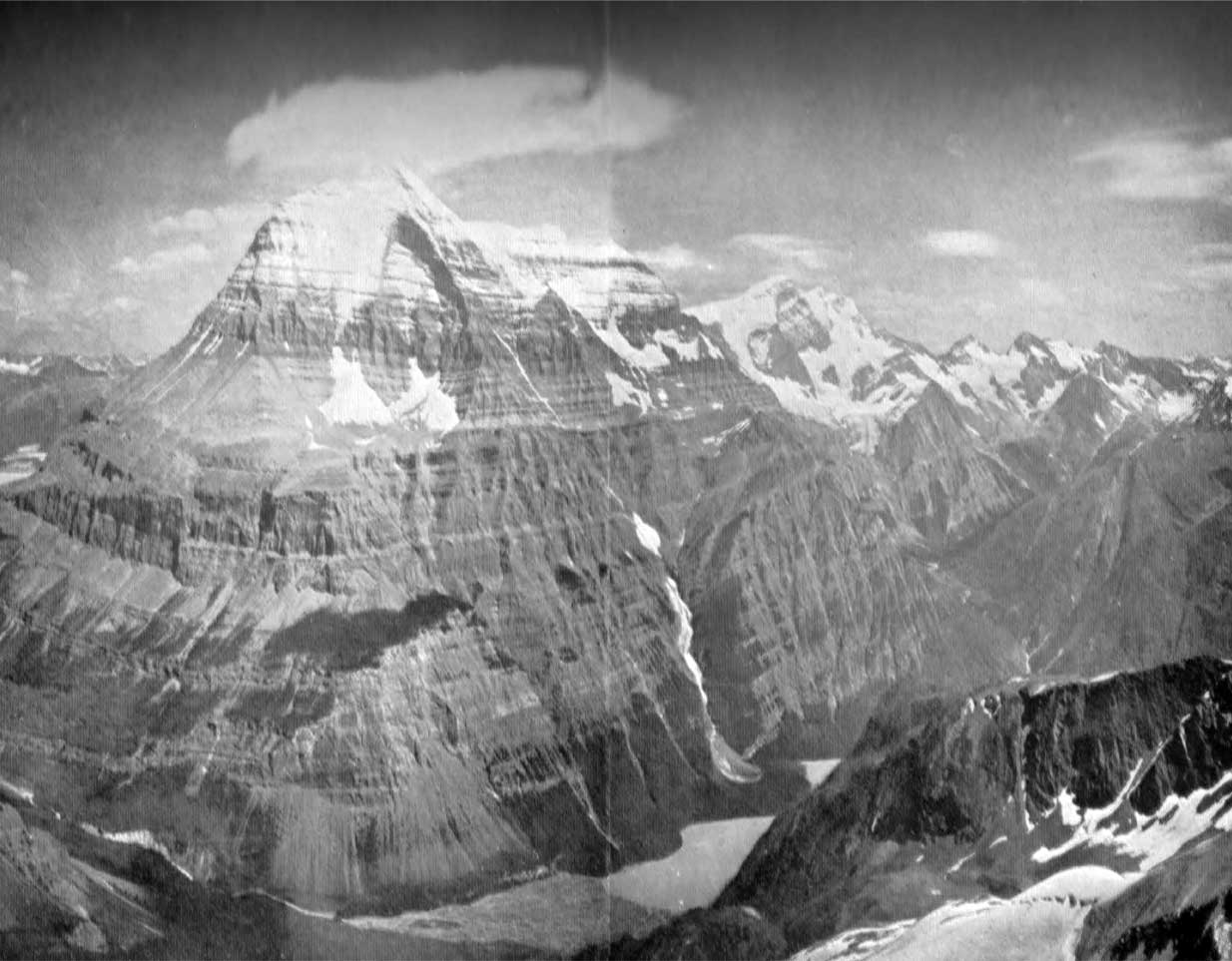 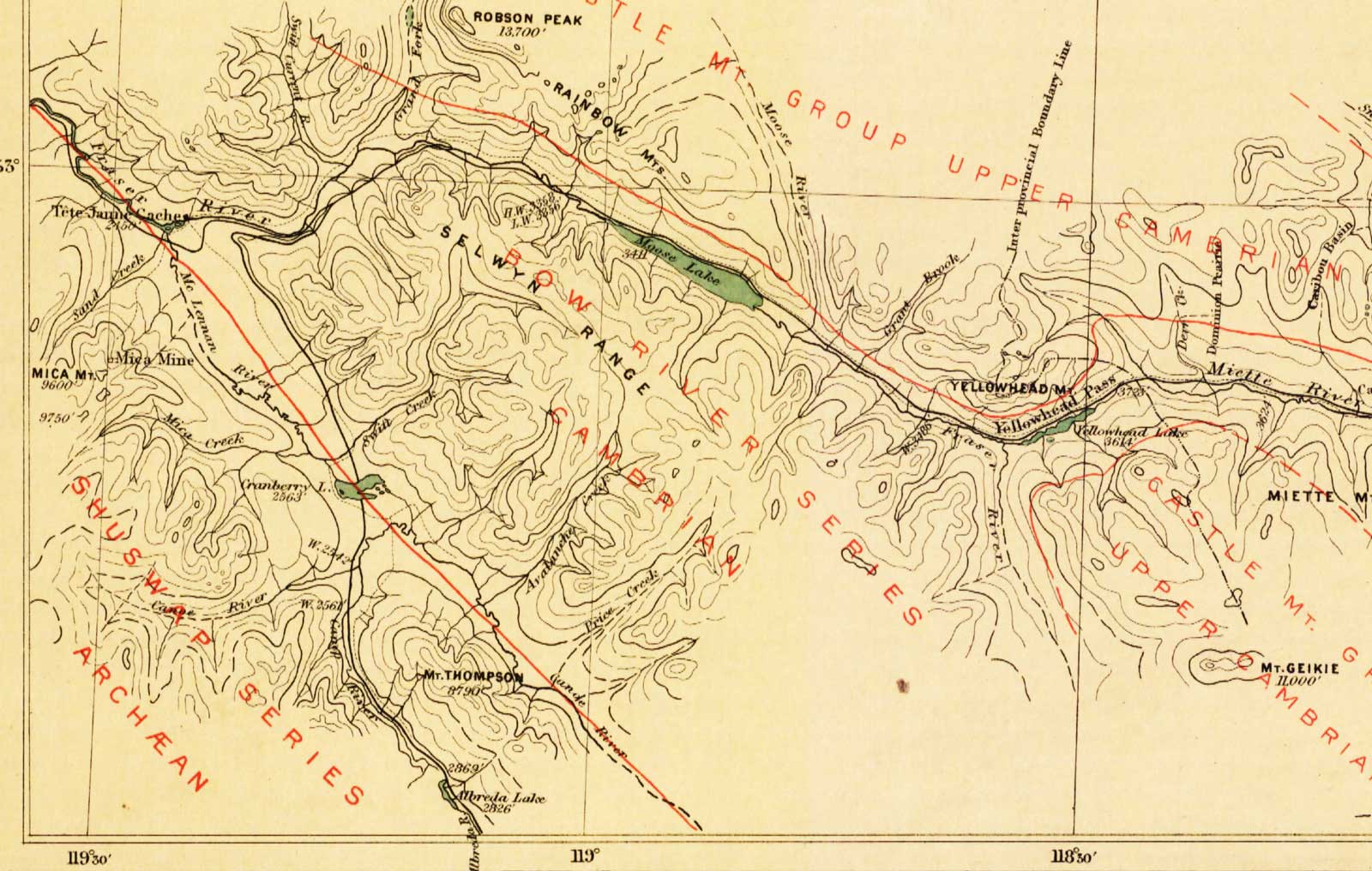 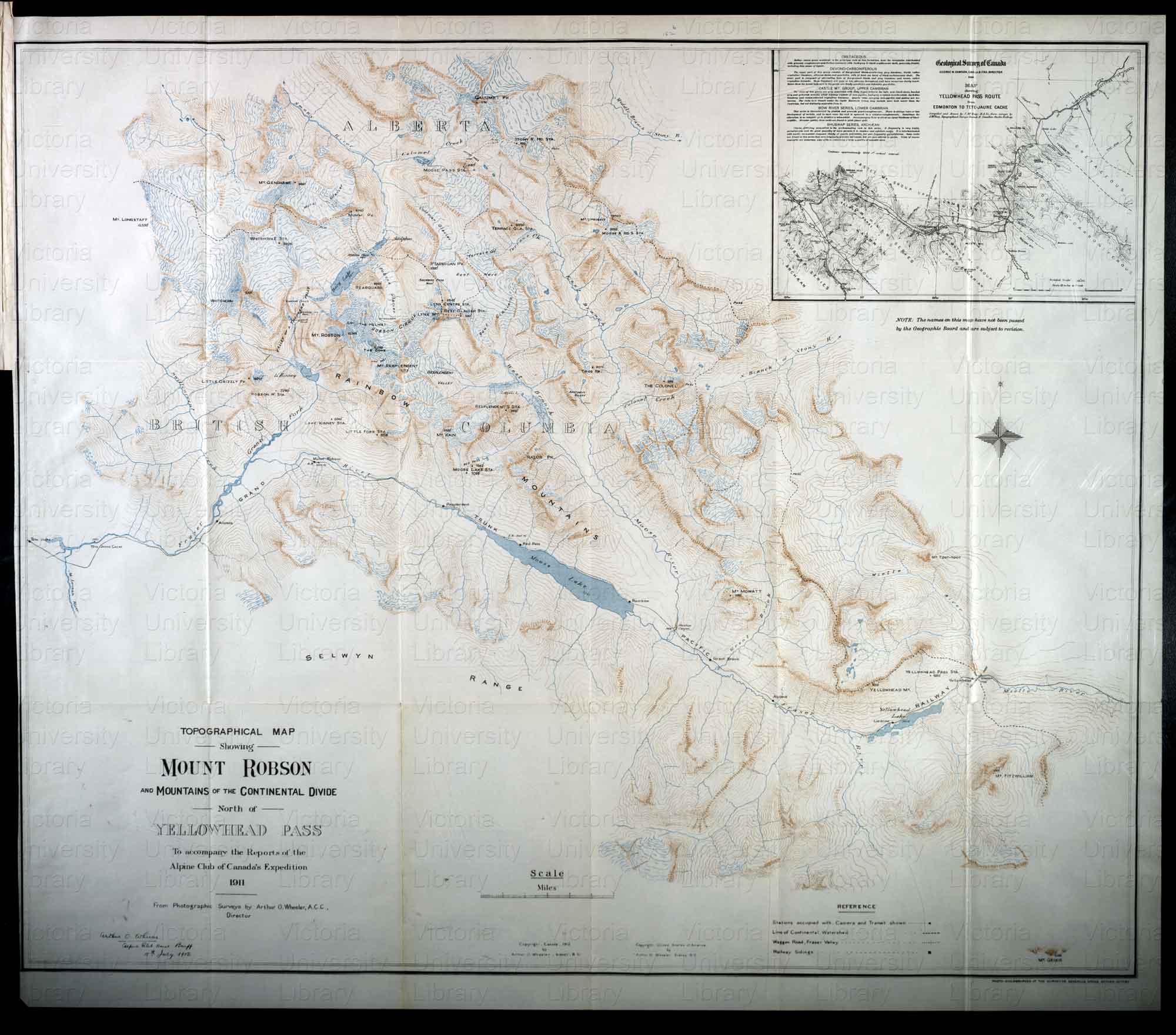 Looking up Grand Fork is the most imposing view met with on the whole route. Great mountains are on every hand, but over all stands Robson Peak, “a giant amongst giants and immesurably supreme.” This, as well as the following, is from the description of the mountain by Milton and Cheadle. “When we first caight sight of it, a shroud of mist partially enveloped the summit, but this presently rolled away, and ws saw its upper portion dimmed by a necklasce of feathery clouds, beyond which its pointed apex if ice, glittering in the morning usn, shot up far into the blue heaven above.”

The top of the mountain is usually hidden and rarely indeed is it seen entirely free from clouds. The actual height of the peak is 13,700 feet, or 10,750 feet above the valley. The face of the mountain is strongly marked by horizontal lines, due to the inequal weathering of the rocks, and has the appearance of a perpendicular wall. From the summit to the base on the Grand Fork, a height of over 10,500 feet, the slope is over 60 degrees to the horizontal.

Although Robson Peak has been long known, its height had never been determined, nor was it supposed to be particularly notable in that respect, but now since the height of Mts. Brown, Hooker and Murchison have been proved to be greatly exaggerated, it has the distinction of being the highest known peak in the Canadian Rockies.
— McEvoy, 1900

As a result of my trigonometric levels, the altitude of Mt. Robson is here computed at 13,068 feet. It is derived from transit readings taken at three distinct bench-marks at wide intervals apart-placed by the engineers of the Grand Trunk Pacific Railway-upon signals set on the adjacent peaks bordering the Fraser River Valley. The elevations derived were then carried from summit to summit to the highest point of the mountain. In one case the reading from the benchmark was directly upon the crest of Robson. The deduction is not absolute. It is impossible to make it so where no distinct signal, such as a rock cairn, has been sighted upon; and none can be placed on Robson, as the summit is covered by an immense snow cornice. Altogether, five sights were obtained on the crest from other summits, of which the altitude had been obtained through sighting on rock cairns built upon them, and one from the benchmark referred to. Two of these were discarded as uncertain, as they had been carried for long distances. McEvoy established a height for Mt. Robson of 13,700 feet, but do not think that any systematic series of observations were .employed by him. It is the fate of great peaks to have their reputed heights brought down, and fancy that more extended observations will find Robson no exception to the rule. The Massif with its glaciers and glacial lakes covers an area of over thirty square miles and measures three miles through at it base where it rises one and three-quarter miles into the air above the Grand Fork.
— Wheeler, 1912

Although Robson Peak has been long known its height had never been determined until recently, nor was it supposed to be particularly notable in that respect, but now since the height of other mountains in the Rockies which were considered to be the highest in Canada have been proved to be greatly exaggerated, Mt. Robson has the distinction of being the highest known peak in the Canadian Rocky Mountains, and will be owing to its magnificent surroundings, one of the greatest attractions of the Grand Trunk Pacific for tourists and alpine climbers, and as one mountain climber who has made two attempts to ascend this mountain, has said, “It will be the show place of the world.” The mountain is easy of access, within a few miles of the Grand Trunk Pacific track.
— Bell and Hinton, 1919