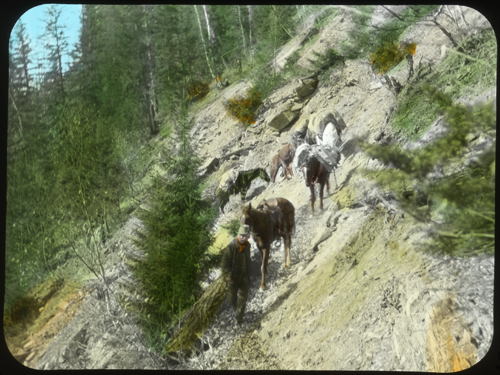 A bit of trail on the Fraser [possibly Shale Hill]
Photo: Mary Schäffer, 1908
Whyte Museum of the Canadian Rockies

Before the building of the railroads and the highway, the steep hill east of Mount Robson was the most treacherous section of a difficult trail between Yellowhead Pass and Tête Jaune Cache. When the “Overlander” gold seekers came to the hill in 1862, they unpacked their horses and carried the loads on their own shoulders.

We came to a place where the trail passed along the face of a lofty cliff of crumbling slate. The path was only a few inches in width, barely affording footing for the horses, and midway a great rock has slipped down from above, resting on the narrow ledge by which we had to pass. This completely barred the way, and the perpendicular cliffs rendered in impossible for us to evade it by taking any other route. We therefore cut down a number of young pine trees, and using them as levers, set to work to dislodge the obstacle. After an hour’s toil, we succeeded in loosening it from its position, and with a single bound it rolled down with sullen plunge into the deep river, far below. We then led the horses past, one by one, with the greatest caution. The path was so narrow and dangerous, that we gave it the name of Mahomet’s Bridge.

James McEvoy surveyed in the Yellowhead. Pass region in 1898:

Issuing from Moose Lake the Faser moves slowly along in a wide stream for two or three miles, then it narrows, and taking a steeper grade, hurries rapidly downward. Two and a half miles below the lake, the old railway location line crosses from the north to the south side of the irver. Some distance further on, the valley becomes more confined, as the mountains on the north side now close in upon the river, similarly to those on the south; and, at a distacne of eight miles in a straight line from the lake, the trail is forced to seek a passsage by a narrow foothold scooped outof the face of crumbling rock overhanging the river.

Mary T. S. Schäffer wrote of her explorations in 1908:

The last day’s travel to Mount Robson was a great improvement on anything we had had since leaving the main Athabasca. The moment we started, the valley began to narrow and close in on the river. At places where we could gaze down upon the water fighting its way through huge rocks, we blessed the steady little feet beneath us picking a way so calmly over the treacherous trail, for a slip or a stumble meant the river two hundred feet below.