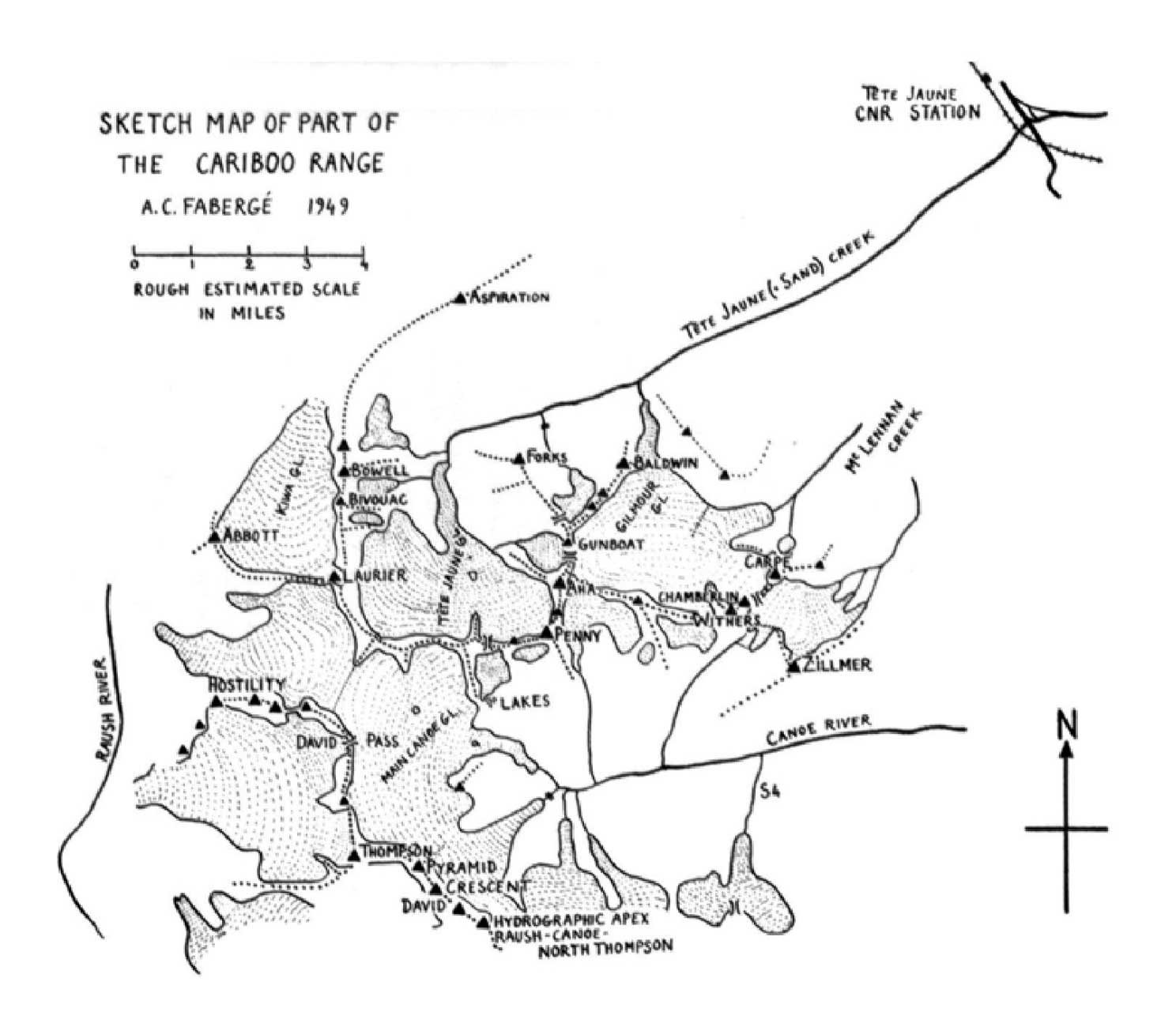 A Sketch Map Of The Cariboo Range

The central Cariboos are a region of high peaks, big glaciers and vast snowfields. Little can be seen from the valleys, and to appreciate the charm of these mountains one must go high. There, one is in a world of severe black cliffs set among the wonderfully precise curved surfaces of snow formations, of rock peaks with ridges sharply outlined by fantastic cornices. It is hoped that Arnold Wexler’s article in this issue and the map may encourage others to visit this region. The map is based on prismatic compass bearings from a number of vantage points, and on measurements of photographs. It is in every sense a cooperative effort, and several members of the 1949 party contributed to it. It is strictly confined to what we actually saw, and should be consulted together with Zillmer’s map (C.A.J., XXXI, 1948, p. 24) which covers more territory. To avoid overloading the map, the names of peaks have been abbreviated, thus Laurier-Mt. Sir Wilfred Laurier, etc. It may here be noted that Holway’s Penny and Aha are in all probability identical with the unnamed points 10,075 and 10,225 respectively, of Carpé, mentioned on page 151 of the 2nd edition of Thorington’s Guide to the Interior Ranges of British Columbia.

Some of our observations on passes may be of use to future climbers. The Tête-Forks basin pass is easy on both sides. The west side of Gunboat (Tête-Gilmour) Pass deserves a word of caution: there are some very large and almost impassable crevasses in the middle of the glacier. One may either go to the Tête-Forks Pass and thence follow Gunboat Ridge (or better the level glacial shelf on its west) or, alternatively, up the true left side of the glacier close to Aha Mountain.

The Tête Jaune-Canoe Pass marked on the map is the most convenient passage between the two valleys; it was also used by Zillmer in 1947, and is easily identified on the north side difficulties in crossing the by pass and the small spur jutting into the Tête Jaune Glacier immediately west of the pass. There are no difficulties in crossing the pass and in reaching the small glacial lakes. The main Canoe icefall cannot be tackled directly, and a band a of cliffs extends far down the true left side of this glacier. We found a convenient passage through these cliffs. Just south of the lakes there is a characteristic knoll covered with heather and dwarf spruce; if one descends immediately to the left of this knoll, keeping as close as possible to its steep sides, one is brought to a grass band which crosses the cliff and gives access to the lower Canoe Glacier. We did not go down to the Rausch, but we are almost certain that the glacier between Hostility and Sir Wilfred Laurier provides a convenient way, the icefall being by-passed along the slopes of Sir John Abbott.

David Pass is easy and needs no comment. The Chamberlin-Carpé Pass, apparently the only high level passage to the McLennan III basin, involves steep snow and a bergschrund which might under some conditions give trouble. 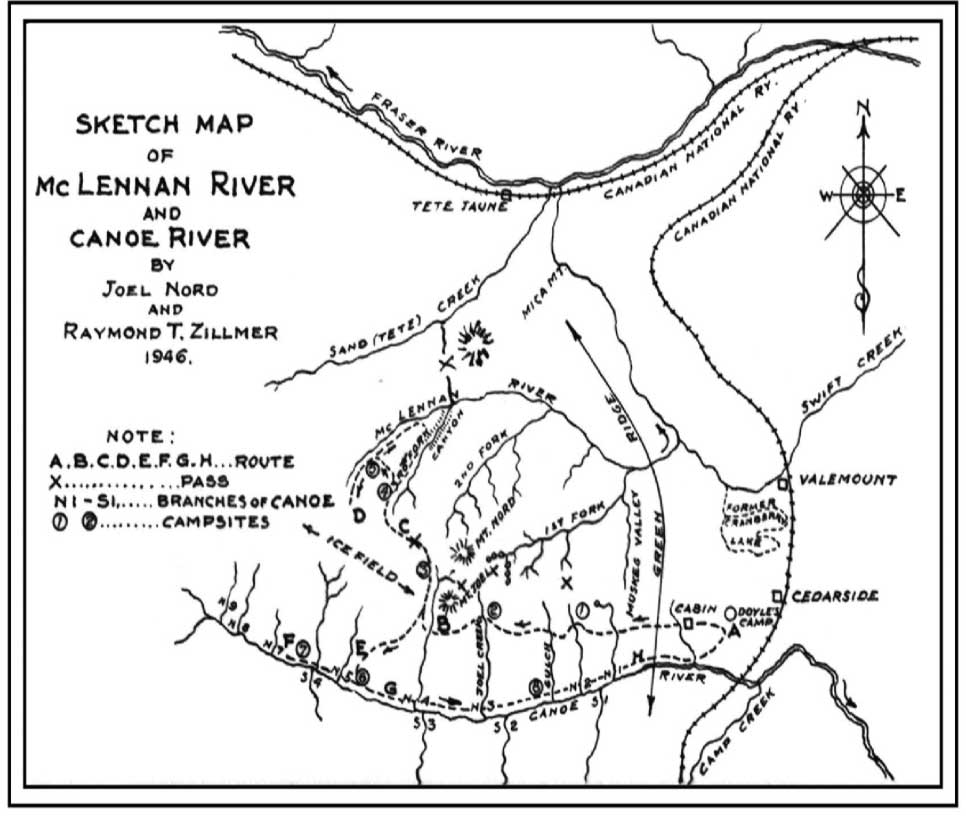 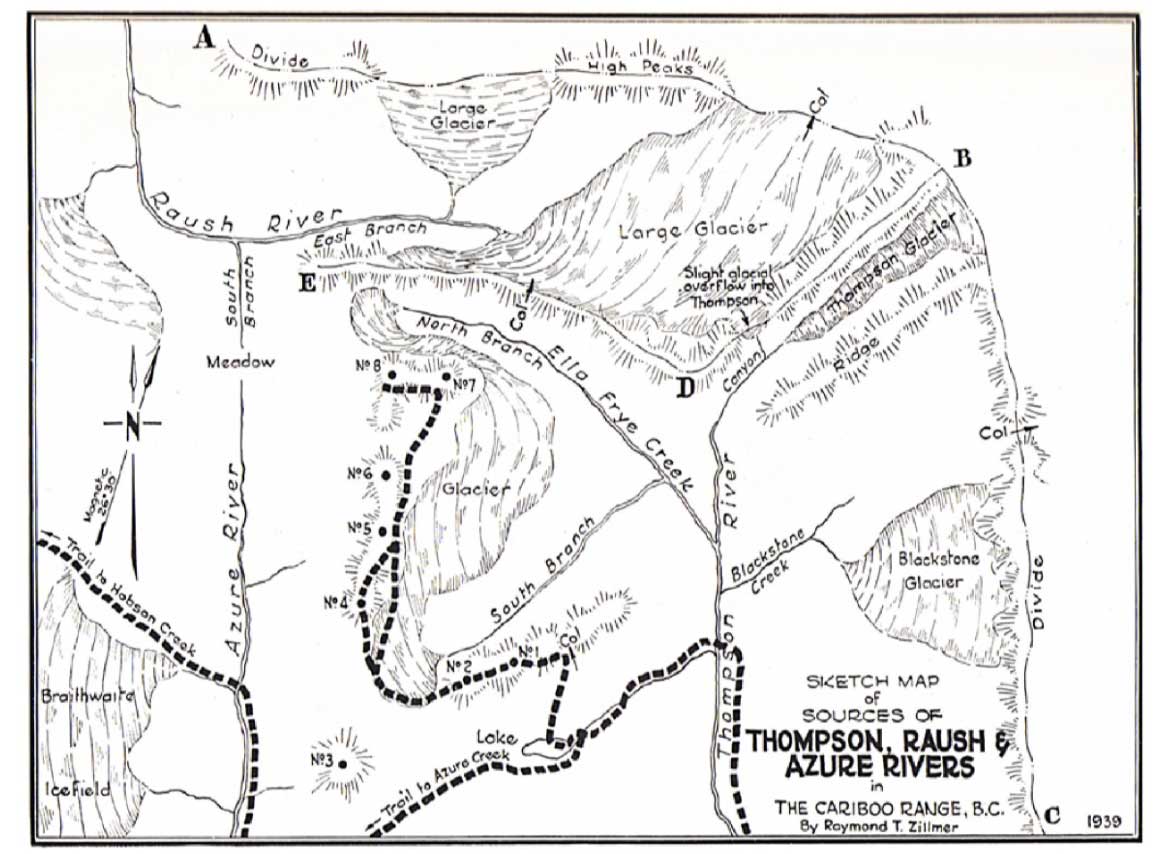 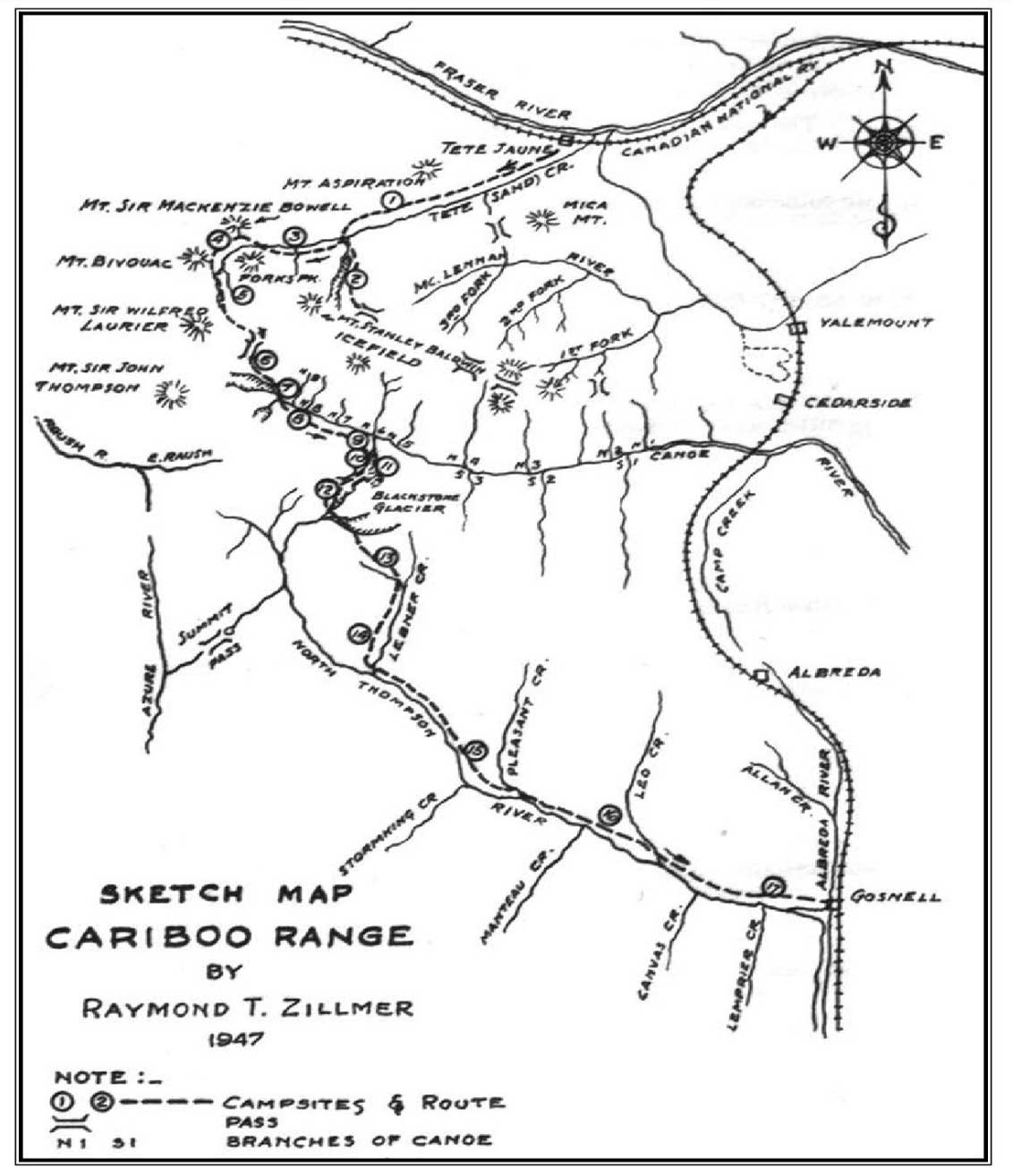 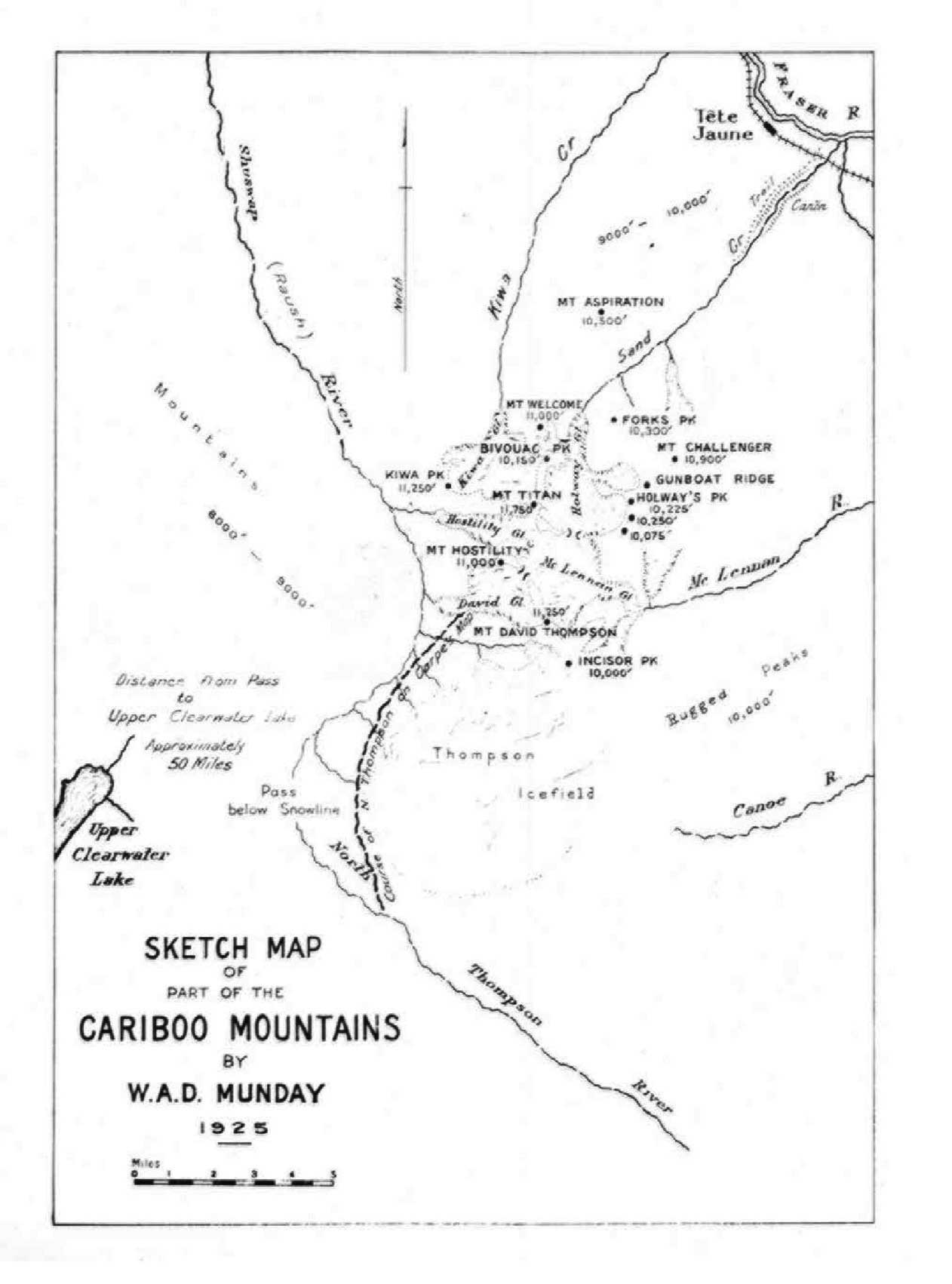 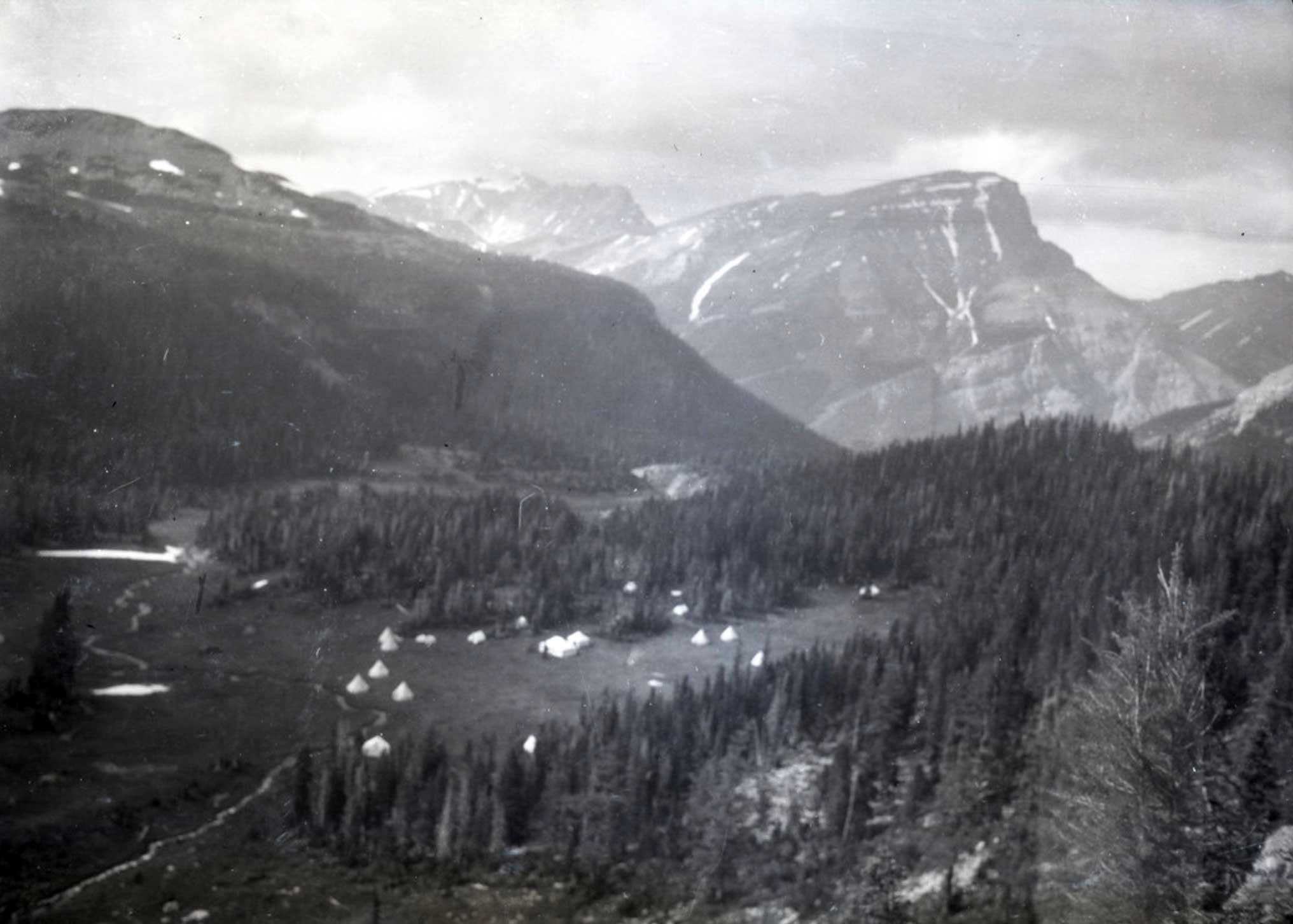 A group of white tents in a clearing, photographed from above.
Andrew J. Gilmour Collection AJG.B4A8.007
American Alpine Club 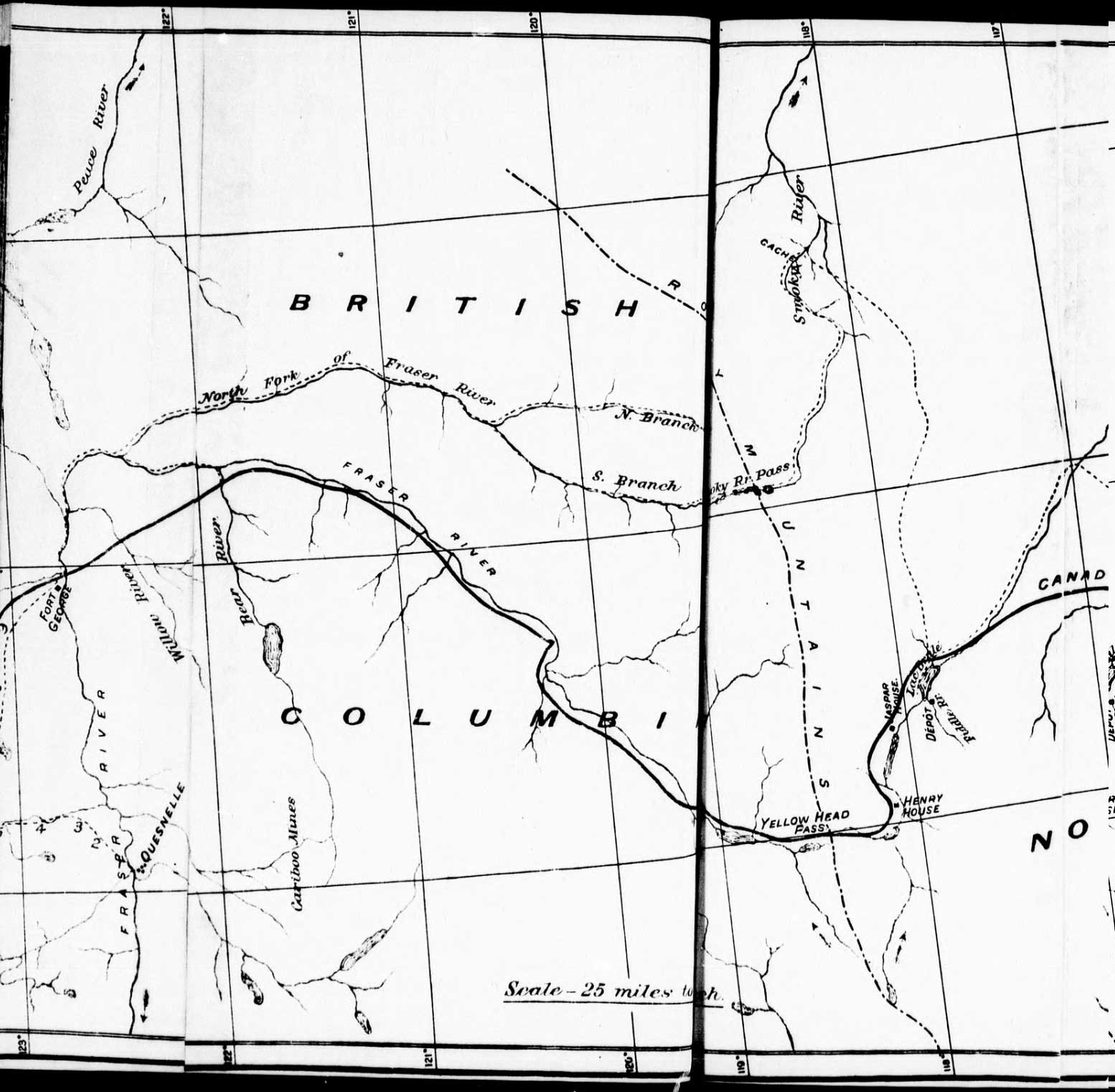 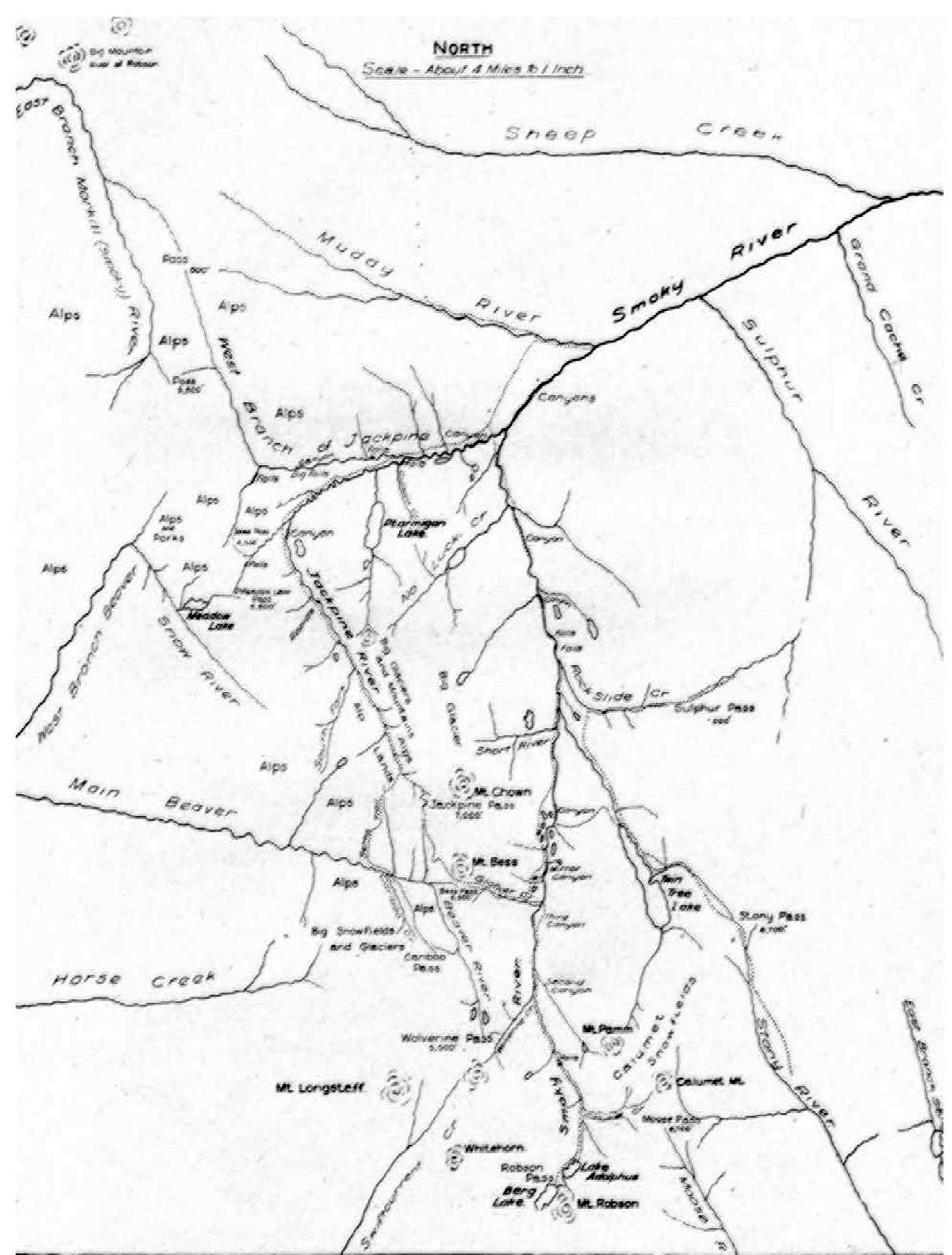 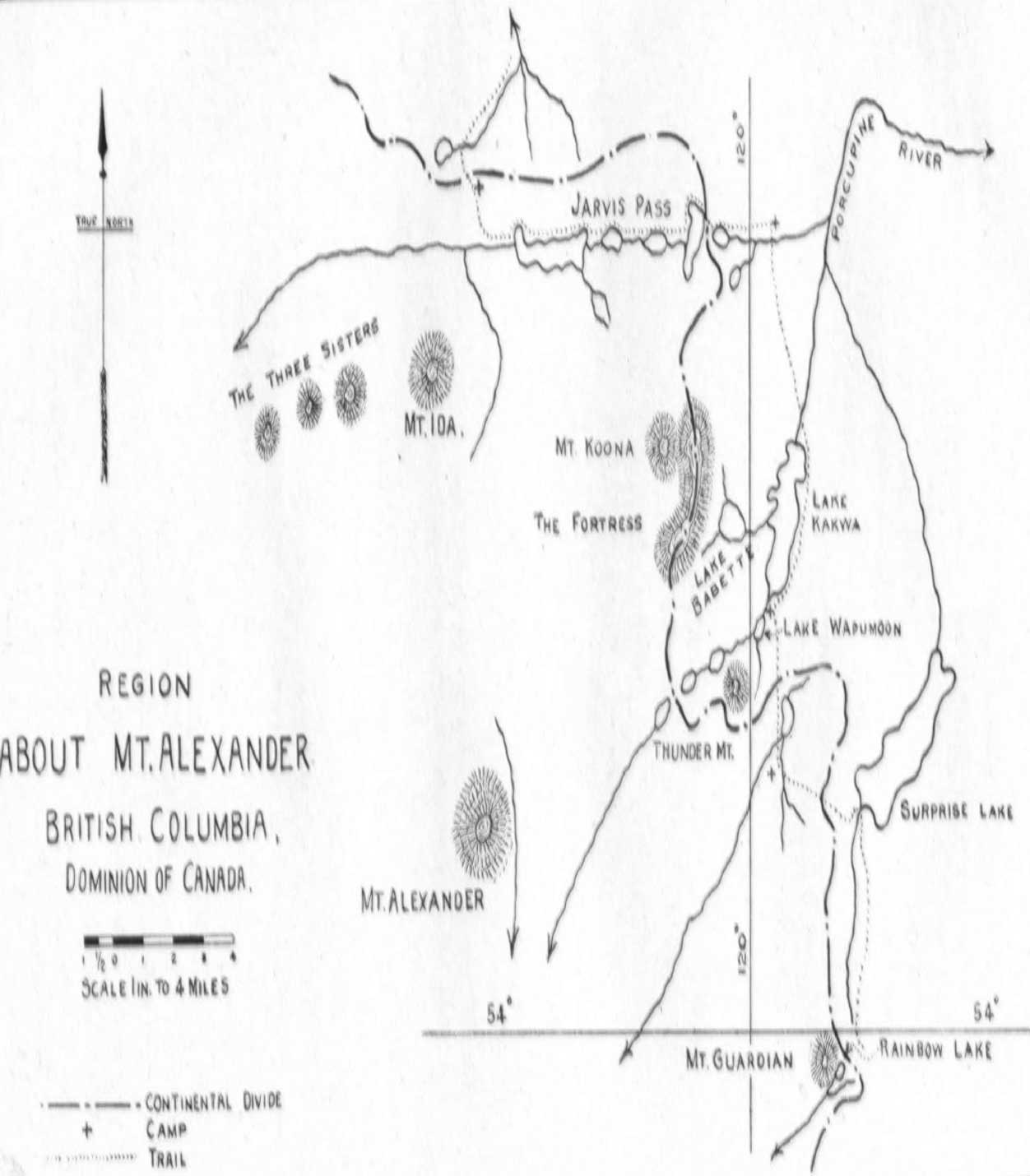 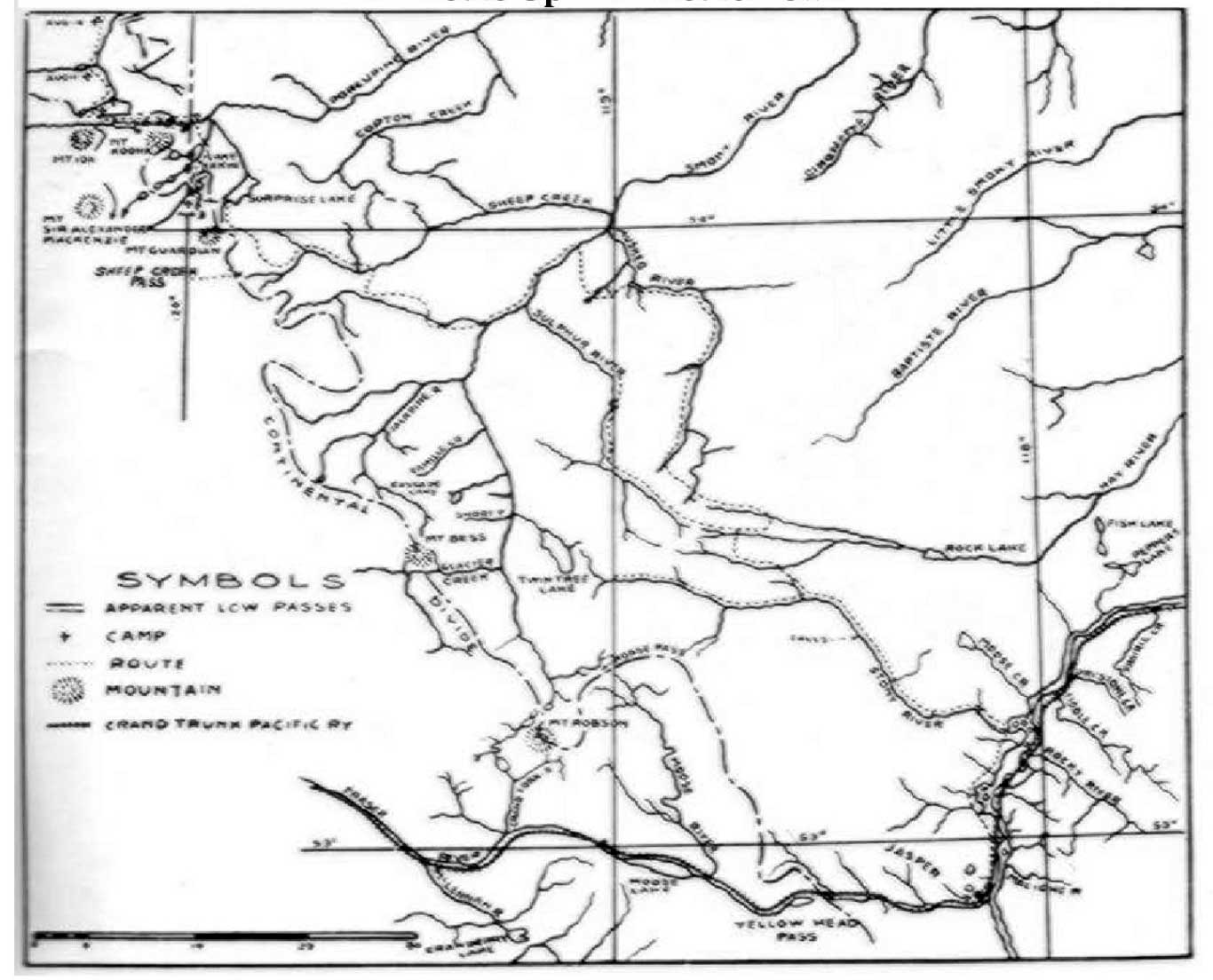 “Pete” Fay as he was known to his friends had been a member of the [American Alpine] Club for 59 years at the time of his death last August [1971]. His qualifications for election in 1912 were four seasons in the Canadian Rockies beginning in 1906. In 1914 he joined a Smithsonian expedition which left Jasper, Alberta in June for the purposes of exploration, mapping and the collection of birds and mammals in the northern Rockies. Reports were filed with the Biological Survey in Washington. In mid-October the party met a trapper who showed them an old newspaper with reports of the first weeks of World War I of which they had no inkling. For the next three or four days they traveled non-stop to reach Hudson Hope on the Peace River.

Pete graduated from Harvard in 1907. During World War I he joined the American Field Service to drive an ambulance in France and later served with the Air Force in France and Belgium. Afterwards he was associated with an investment counseling firm in Boston for many years. Aside from two years on the Council (1930-1932), he did not take an active part in Club affairs, though he attended frequent meetings. Frail health confined him to his home for the last ten or more years.

References:
British Columbia. Other name for Berg Glacier
Earliest known reference to this name is 1909 (Coleman). 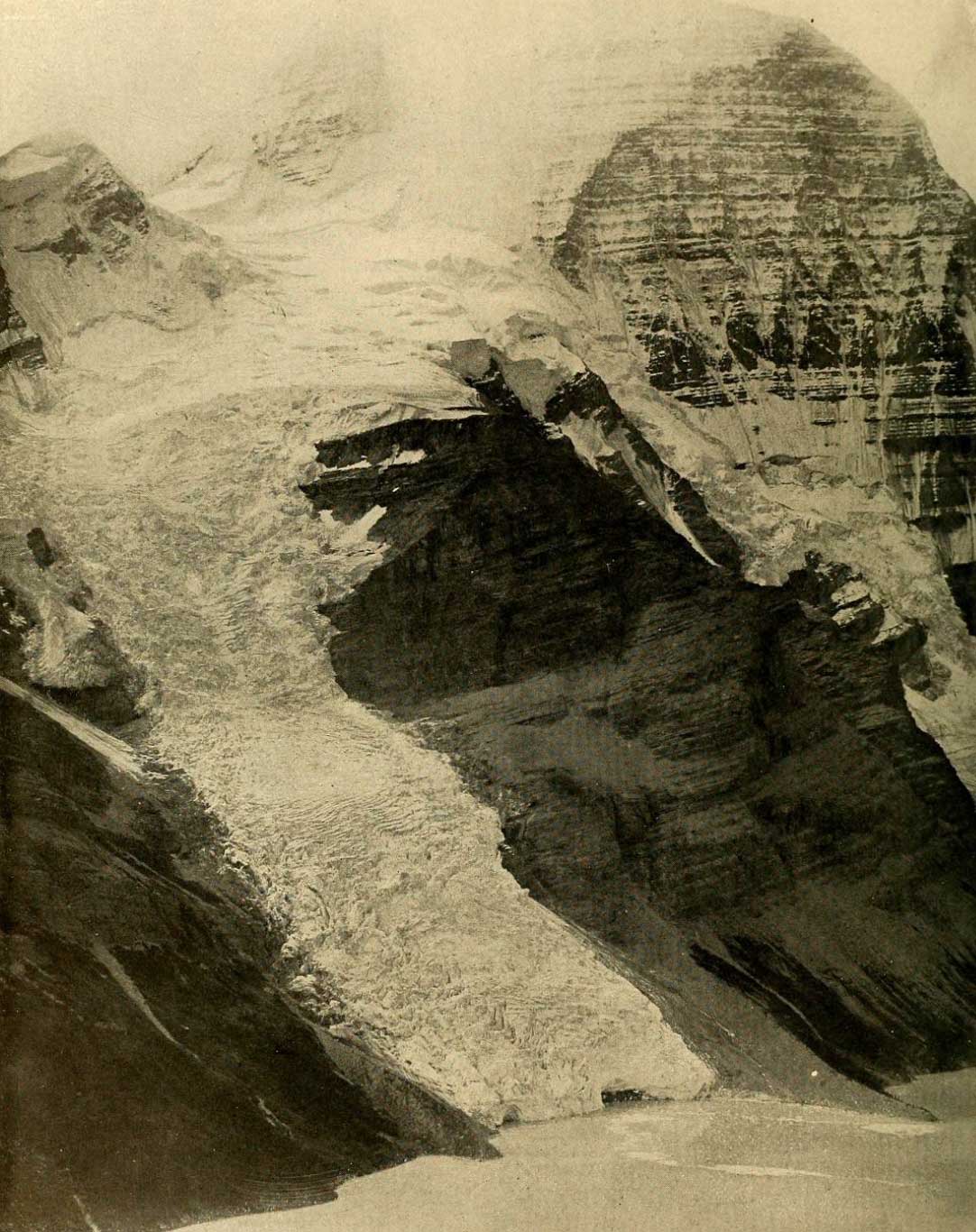 View of Blue or Tumbling Glacier from its névé on the slope of Robson Peak to where its foot enters Berg Lake, a descent of 5,000 feet. Photo: R. C. W. Lett
National Geographic Magazine 1913

“Blue Glacier is a wonderful stream of slipping, sheering, blue, green, and white ice. Why it does not slip and slide as a whole down into Berg Lake is one of the unsolved secrets of this great mountain,” wrote Charles Doolittle Walcott in his report on the 1912 Smithsonian expedition to Mount Robson.

“From the elevated ice-field, fed by avalanching snows from the sides of Robson, a gigantic ice cascade tumbles down rock precipices and buries its nose in the waters of Berg Lake,” wrote Arthur Oliver Wheeler after his 1911 visit. “At frequent intervals great chunks of ice break off with a report like cannon, and, bounding and rattling down the steep incline, plunge into the clear water of the lake. Dr. Coleman has named the overhanging ice-fall ‘The Blue Glacier,’ The term is not strong enough: ‘Tumbling Glacier,’ though not so euphonious, is a better name to express the activity of such a unique feature.”