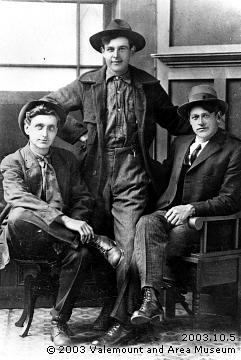 Nicknamed “the Grizzly” because of his mane, Dave Henry first visited the Valemount area before 1910. “He and Fulton McKirdy came up the Canoe Valley in a scow from Revelstoke as far as they could,” said Mike Frye, whose family accompanied Henry to the area from North Dakota in 1911. Henry was “one of the best liked in the district, a real story teller,” according to another early settler. Dave Henry opened the first store at Swift Creek (later named Valemount) in1912. He is listed as storekeeper in the 1937 Valemount voters’ list, and as a cook in the 1943 Valemount post office directory. He was trail cook for the Hargreaves brothers’ hunting parties for many years, and also trapped in the area. To escape the cold and snow, Henry moved to Kamloops in the early 1950s, and from there to a Vernon nursing home. He died in the early 1960s.