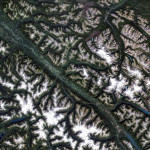 A name chosen in March, 1962, after a contest held by the Dunster Farmers’ Institute. The second and third choices were Echo Valley and Long Valley. The name was officially recognized in 1976.