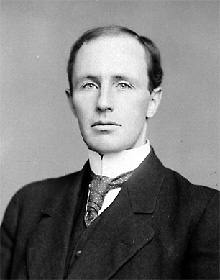 Ontario-born Arthur Meighen (1874-1960) succeeded Robert Borden as Prime Minister of Canada in 1920. Meighen was responsible for many measures under which the World War I was prosecuted, including the conglomeration of the Canadian Northern, Grand Trunk, and Grand Trunk Pacific railways as the nationalized Canadian National Railway.