“Tonquin Pass has no history, as far as your Commissioners are aware,” wrote boundary commissioner Arthur Wheeler in 1924. “The name, Tonquin, as applied to the valley and the part of it that constitutes the pass over the continental watershed, was given by the Geographic Board of Canada. It was conferred in commemoration of John Jacob Astor’s ship, the Tonquin, which in 1810 sailed from New York and founded Fort Astoria, a trading post at the mouth of the Columbia River.” 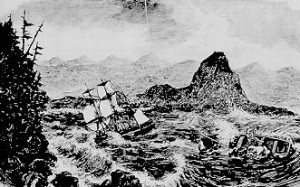 25th March 1811 The sailing ship Tonquin, captained by Jonathan Thorn loses the crew of a rowing boat while crossing the bar at the mouth of the Columbia River to establish a fur trading post for John Jacob Astor

Leaving Astoria, the Tonquin sailed to Clayoquot to trade for furs, where the insolence of Captain Thorn so outraged the Indians that they seized the ship and massacred all but three or four of the crew. These survivors, before escaping in the ship’s boat, lit a fuse leading to the Tonquin’s powder magazine. Some 200 Indians were killed when the ship blew up.