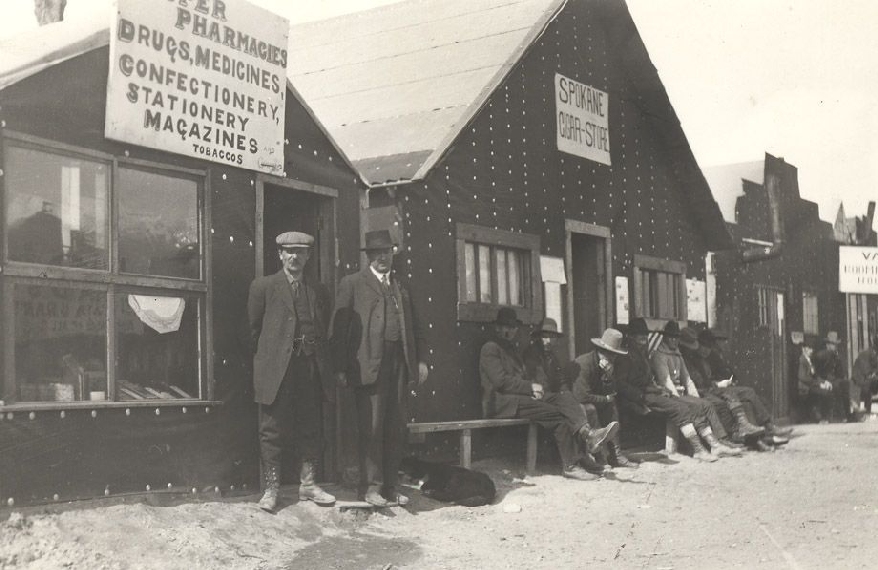 Tête Jaune Cache magistrate William A. Jowett noted in his diary in June, 1914: “To 49 for Henning’s surprise party on his return from being married with Bel and had a good time!”

The construction company of Palmer Brother and Henning were contractors on the construction of the Canadian Northern Pacific Railway, and had a siding on the Grand Trunk Pacific line at Mile 49, near Tête Jaune Cache, to service their camps on the Canoe River. In the years after 1912, Henningville grew into a small hamlet with a Canadian Northern Pacific warehouse and some dozen other buildings, including the Austin Brothers store, Cox’s post office, and a pool hall. The name Henningville was rarely used, because the railroaders all called the location “49.”

Surveyor James Walker wrote, “From Mile 53 — this mileage is reckoned from the Summit at Yellowhead Pass along the railway — the [Fraser] river is navigable in high water as far as Soda Creek, a distance of nearly 500 miles. The Fraser has proved to be invaluable to the building of the Grand Trunk Pacific Railway, despite the fact that so many lives and so much property have been lost in its waters. These accidents have happened mostly through carelessness and ignorance. The chief obstacles to navigation are due to the existence of shifting sand and gravel bars, the Goat Rapids, the Grand Canyon, and the Giscome Rapids, all above Fort George. High water minimizes this danger for the larger craft, but presents sometimes greater dangers for the smaller ones.”