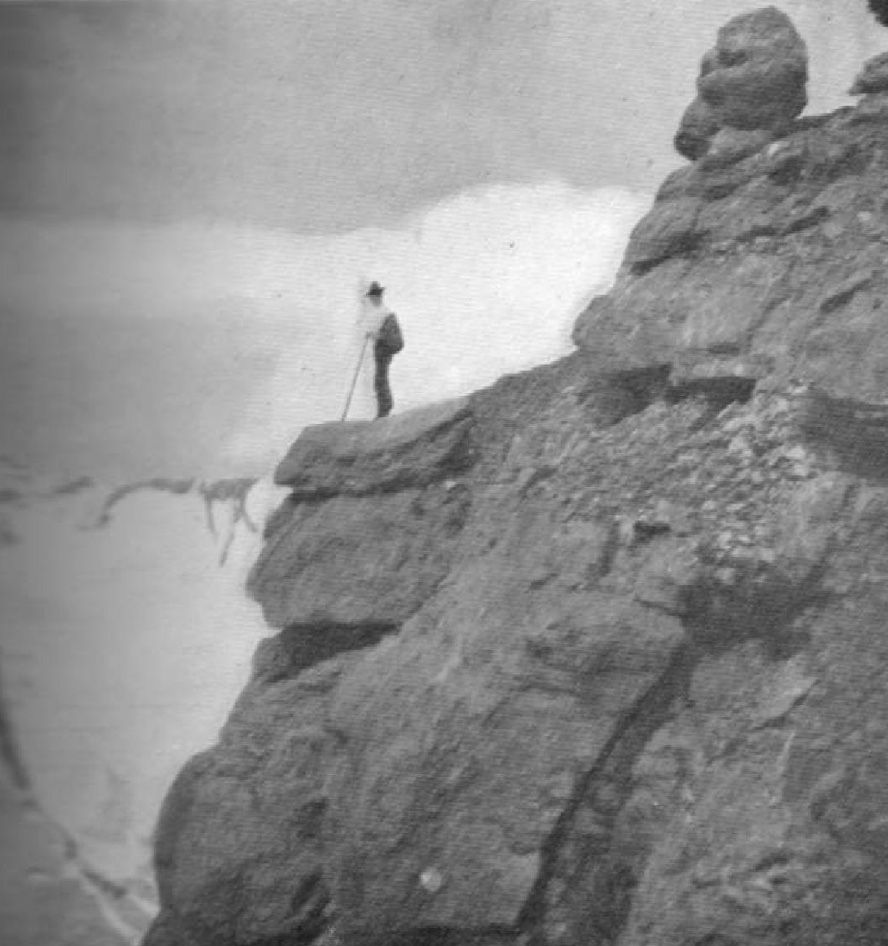 “Back on the horizon line between Iyatunga and Titkana is a fine point that I am calling Phillips Mountain, in recognition of Donald Phillips, who made the ascent of Roson with Dr. Kinney,” wrote Charles Doolittle Walcott of his 1912 trip to the Robson area.

Donald (Curly) Phillips (1884-1938) was a Jasper guide and outfitter who accompanied George Kinney almost to the top of Mount Robson in 1909. Phillips spent his youth in the Lake of the Bays district of Ontario, where he became an expert woodsman and master of white water craft. He was a member of the Guide’s Association of Ontario.

He came to the Jasper region in 1909 to explore the country and start an outfitting and guiding business. He met George Kinney on the Athabasca River that year, when Kinney was looking for a partner to assault Mount Robson. Although Phillips had no mountain climbing experience, he joined Kinney, and they made several ascents around the end of July, finally reaching, on Friday, August 13, what Kinney claimed was the peak. Phillips later stated that the highest point had not been reached.

“I found in Phillips a very prince of the trail,” wrote Kinney. “Quick, handy, a splendid cook and bubbling over with good nature, he made a camp-mate that could not be excelled. Never in all the hard days did he utter a word of discouragement, or falter in our undertaking, and though he had never climbed mountains before that summer, he proved to be a cool-headed and cautious climber. I have seldom seen his equal.”

Phillips catered and acted as guide to Arthur Wheeler’s 1911 expedition around Mount Robson. Wheeler described him as a “superman” and “a mighty hunter,” “a skilled river-driver” who “can cross any kind of water on a single stick big enough to hold him.”

Phillips catered for the Alpine Club of Canada’s 1913 camp, during which William Foster, Albert McCarthy, and Conrad Kain made the first ascent of Mount Robson. Phillips built a causeway along the edge of the Robson River gorge, beside White Falls and the Falls of the Pool, which gave hikers and horses access to Berg Lake from the railway.

He took Mary Jobe on her exploratory trip to Mount Sir Alexander (“Mount Kitchi”) in 1915 and later organized many canoe trips on the Peace and Mackenzie rivers. Phillips also catered for the second Mount Robson camp in 1924, for the Tonquin valley camp in 1926, and for the Maligne Lake camp in 1930, when he was handling tourist motor boat transportation on Medicine and Maligne lakes. He became the most renowned tourist guide of the region.

Phillips died in an avalanche while skiing on the slopes of Mount Elysium, near Jasper. In a memoriam published in the 1937 Canadian Alpine Journal, Wheeler called him “A splendid specimen of manhood; fearless, always efficient, always full of resource, always even-tempered, he was the prefect guide in whom his patrons had the greatest confidence, and he will long be remembered in the annals of Jasper.”