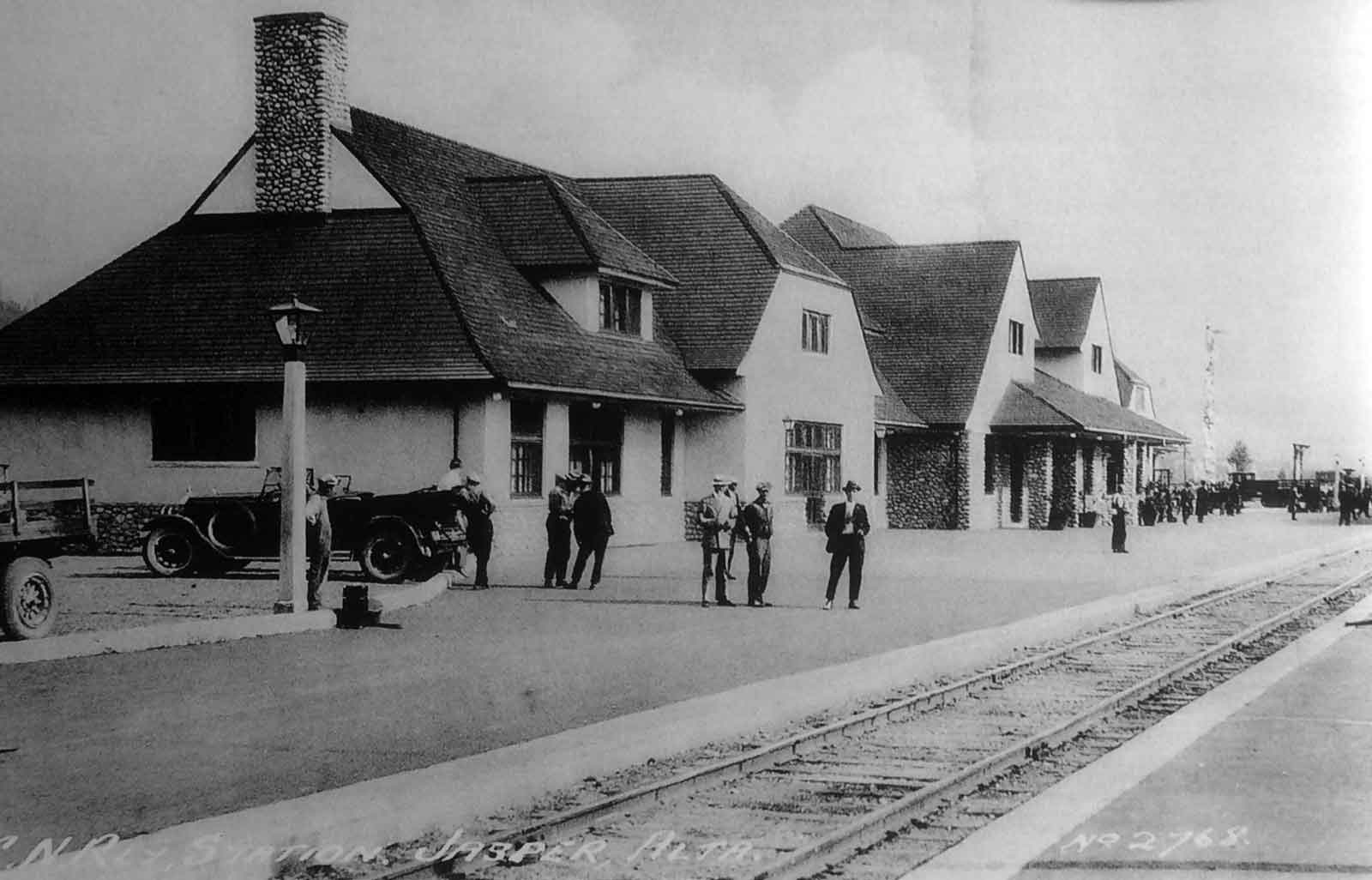 The town of Jasper is named after the fur brigade post in the area. It was first mentioned in Franchère’s Relation d’un voyage à la Côté du Nord-Ouest de l’Amérique Septentrionale (1820) (see Franchère Peak). The North West Company post was established in 1813 on Brulé Lake as a “provision depot with the view of facilitating the passage of the mountains through Athabasca Pass.”

Franchère in 1814 called the post was called “Rocky Mountain House,” It was managed by Francois Décoigne. This blonde-haired trapper used to store his furs near Tête Jaune Cache, in British Columbia; his nickname was “tête jaune” (yellow head).

In 1817, the position was filled by Jasper Hawse, whose name was adopted to distinguish the post from the new Rocky Mountain House established on the North Saskatchewan River. In 1821, the Hudson’s Bay Company and the North West Company amalgamated and by 1824, Michael Clyne was in charge of the post. In 1829, Clyne built a new post at the junction of the Athabasca and the Snake Indian rivers. From 1835 to 1849, Colin Fraser ran the post.

In the early 1850s, it was closed as it was losing money. It was then reopened by Henry John Moberly and then closed in the late 1850s.

The Jasper Forest Reserve, later Jasper Forest Park, was named for the original fur brigade post. The confluence of the Miette and Athabasca rivers was selected by the Grand Trunk Pacific Railway as the location for their divisional point. This crew-changing station was given the name “Fitzhugh” in 1911, after a prominent Grand Trunk Pacific official. The following years, the name was changed to assume that of the new national park in which it was situated.

The Grand Trunk Pacific and Canadian Northern railways serviced many resorts in the West. Not surprisingly, the GTP utilized standard structures at these locations, for example at Nakina, Ontario; Watrous, Saskatchewan; Cooking Lake, Wabamun, and Jasper, Alberta. In contrast, many CNoR resorts had special depots. In 1910 R. B. Pratt designed a simple station for Westside, Manitoba, later renamed James. It was comprised of a single storey building canopies on each end. Inside was a large waiting room, a small office with a bay window, and a freight and baggage room. This became the prototype for at least four other depots, including the one built at Jasper in 1915, shown above. The Jasper station virtually repeated Westsides floor plan, but was finished to a higher standard, with a stone plinth and metal roofing. [p. 37]

The former Grand Trunk Pacific station at Jasper burned down late 1924. In keeping with its reputation as world-class tourist destination, Canadian National Railway Architect Schofield designed a replacement station that was a masterpiece. Its massing borrowed freely from English rural residential architecture and featured a plinth of local cobblestones capped with a course of Tyndall stone. The walls above were of brick, finished on the exterior with rough-cast stucco. The plaster and oak-beamed, vaulted ceiling in the general waiting room was naturally lighted by clerestory glazing. Other services included a restaurant and a dining room, with a feature fireplace and massive cobble chimney. Living accommodation for station staff was provided on the second level. The Jasper station was restored under the auspices of Parks Canada in 2001. [p. 42]