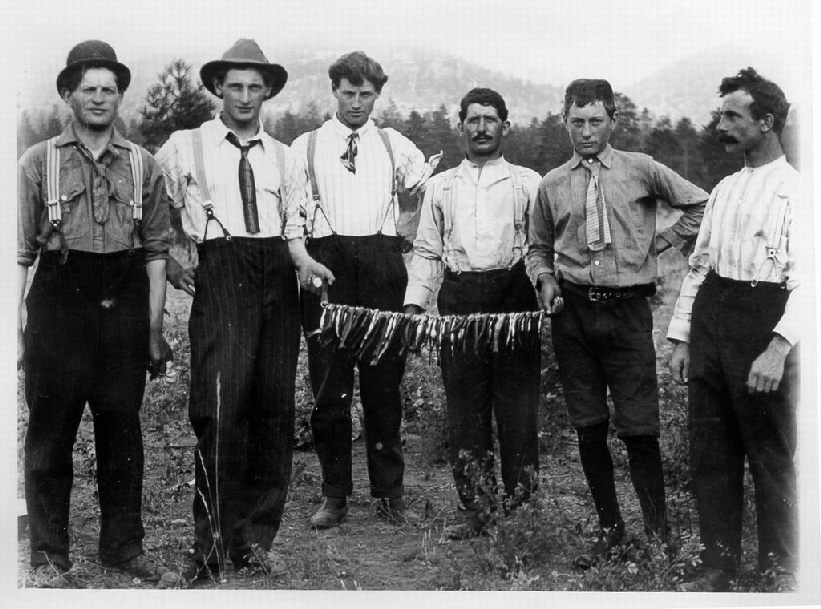 Parents Edward (1846–1939) and Matilda (1852–1904) moved to Oregon from England in 1881, but soon immigrated to Canada “to live under the British flag.” After Matilda died, the family was frequently on the move. George and Roy were the first to leave home, and in 1905 they helped cut a trail from Golden to Tête Jaune Cache.

Jack came to Jasper in the winter of 1913–14 to play hockey. The next summer he started working for the Otto Brothers outfitters, and in the winter of 1917, accompanied Donald “Curly” Phillips and Mary Jobe on their trip to the Wapiti and Mount Sir Alexander area. Mary Jobe wrote, “Phillips had an assistant, Jack Hargreaves, a strong, manly young fellow, willing in every emergency, and always good tempered. I have rarely had a more unselfish companion on the trail.”

Roy, Frank and Jack served in the Canadian Army in the First World War. Roy survived the first gas attack on Canadian forces, but he spent many months in a British hospital. Edward and Matilda’s daughter Myrtle married and stayed in Jasper, and daughter Ethel married and moved to Iowa.

In 1923, Roy married Sophia MacLean (1892-1991), a school teacher from Cape Breton working in Jasper. That same year, Edward pre-empted a homestead at Mount Robson, a couple of miles from the ranch. In 1924, George, Frank and Jack rebuilt Curly Phillips’s trail to Kinney Lake. In 1926, George filed on land close to Jackman Flats. Frank later took an adjoining homestead, and they all kept guiding and outfitting. Dick married Alice Couture, and after a short stay at Jackman, they moved to Jasper where was a carpenter for the park and the railway. George died on the trail.

The “CN Cabins” which the brothers built near Robson Pass in 1921 were operated by the Hargreaves for several years, until Roy obtained a lease on five acres of land on Berg Lake. In 1927, he built the Berg Lake Chalet, a tourist facility which provided meals and accommodation for over 50 years. Chuck Chesser, who had been working for Roy since about 1926, became a partner in 1931, the same year that he married Sophia’s sister Anne Maclean. “Chesser and Hargreaves, Guides and Outfitters” lasted until the late 1940s, when Chesser went to work for the Canadian National Railway. Roy raised beaver, farmed fox for several years, tried mink for one year, and couldn’t get marten to breed. During the war he got rid of the foxes and ran a sawmill at Tête Jaune Cache with Harry Partridge.

In 1959, Roy sold the ranch to Alice Wright, who named it the Mount Robson Ranch. Roy and Sophia moved to Ladysmith, returning to visit Mount Robson several times a year. Sophia made regular trips to Berg Lake until 1976, when she was 84. In 1977, when the Berg Lake Chalet was closed, she made her last trip, by helicopter. In 1988, she was living at a senior citizens’ lodge in Salmon Arm. The operation of Mount Robson Ranch was taken over by Roy and Sophia’s daughter Myrtle Mae Ishbel Hargreaves and her husband Murray Cochrane.