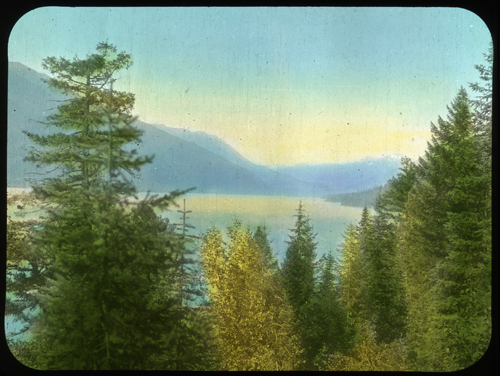 Among the 180 or so Moose Lakes in Canada, the Moose Lake in Mount Robson Park was mentioned by Hudson’s Bay Company governor George Simpson in 1824 when, “to draw the Freemen further into the Mountain than they had been in the habit of going,” he proposed to establish a winter fur trading post at “Moose or Cranberry Lake.” In the fall of that year, chief trader Joseph Felix LaRocque set out to establish the post as a replacement for the post at Smoky River, but was stopped by ice in the Athabasca River and built a post above Jasper House. No establishment was ever built at Moose Lake.

Milton and Cheadle passed by the lake in 1863:

Moose Lake is a fine sheet of water, about 15 miles in length, and not more than three miles in breadth at the widest point, The scenery was very wild and grand, and forcibly reminded us of Wast Water. On the south side, the hills rose perpendicularly out of the water for perhaps 2,000 feet, beyond which was the usual background of rocky and hoary peaks. Over the edge of this mighty precipice a row of silver streams poured with unbroken fall, the smaller ones dissipated in mist and spray ere they reached the lake below.